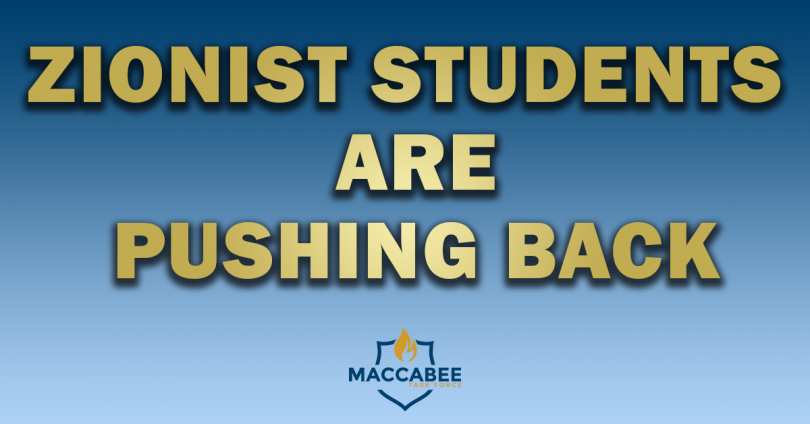 Summers are typically a time of calm and quiet for college students. A time to recharge batteries and prepare for the year ahead.

This summer, however, the anti-Israel crowd isn’t resting – they’re ramping up their efforts and bringing bring back an old intimidation tactic to try and silence Zionist voices.

At the University of Southern California, the student senate Vice President has been facing calls to resign her position for the mere fact that she is a Zionist. SJP has no problem holding this student leader to a double-standard and calling her morals into question for her support of the only Jewish state.

At Syracuse University, Zionist students and professors are the target of an ongoing witch-hunt. They have received threats of physical violence and death. They are being publicly bullied, shamed, and demonized on social media.

Conversely, at Florida State University, a no-confidence vote to oust Ahmad Daraldik, the new Student Senate president who has made numerous disparaging statements against Jews and Israel, failed to pass. The voices of Jews and Zionists, it seems, do not count on campus.

While this news is upsetting, there is a silver lining. Zionist students around the world are pushing back against the bullies and refusing to stand down. Instead, they are standing up – not only for themselves but for Israel. And when we fight back, we win far more than we lose.

Through initiatives big and small, we at the Maccabee Task Force are helping to raise up and equip Zionist students to fight back. Programs such as our Fact Finder trips to Israel, advocacy trainings, large-scale Israel programming on the campus quad, and relationship building events with the broader campus community are some of the many ways we empower our campus activists to take back the campus from the Israel haters.

Student by student. Relationship by relationship. One by one.

While the road may be tough and sometimes treacherous, our students are no longer afraid. They want to stand up for Israel, they have the strategies and the resources to do it.  And this is the bright light at the end of a sometimes dark tunnel.