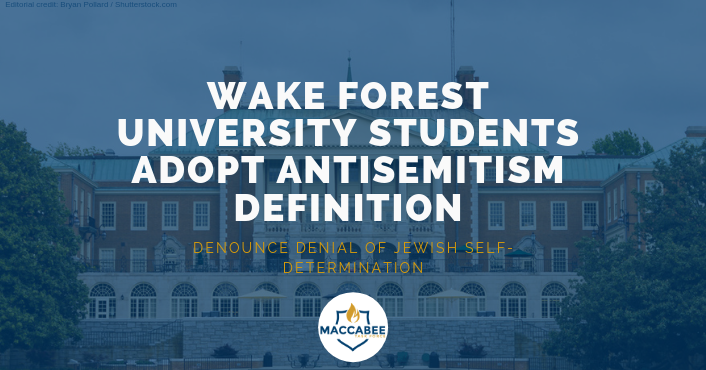 Jewish and Zionist groups at Wake Forest University in North Carolina applauded their student government this week, after it endorsed a resolution condemning antisemitism and adopting a definition of the hatred that includes anti-Zionism.

In a measure passed earlier this month, Wake Forest’s student government recognized a definition of antisemitism published by the State Department in 2010, which is similar to one put forward by the International Holocaust Remembrance Alliance (IHRA) and endorsed by 31 countries.

Examples accompanying the definition include “accusing Jewish citizens of being more loyal to Israel” and “denying the Jewish people their right to self-determination,” among others.

The measure condemned national and local antisemitic acts — including “the purposeful removal of the Star of David from posters” hung in the university’s Scales Fine Arts Center — and acknowledged that “some, but not all, criticisms of and attacks on the State of Israel can be anti-Semitic dog-whistles.”

It bound the student government to “not deliberately facilitate, promote, fund, or participate in any activities that directly promote anti-Semitism or undermine the rights of Jewish people.”

The bill was brought forward in late November, about a month after dozens of Wake Forest students held a vigil for victims of the Tree of Life synagogue shooting in Pittsburgh, in which 11 Jewish worshipers were killed.

“We are extremely excited that all of our hard work has paid off,” Philip Yurchenko, vice president of Wake Forest SSI and an alumnus of the high school program Club Z, said in a statement. “We are proud to see Wake Forest simultaneously support free speech and draw a clear line against anti-Semitism when it comes to Israel.”

“Discussing Israel is often perceived as controversial, but we applaud Hillel and student government for not shying away from this difficult topic,” he added. “We are very fortunate to have representatives that care about protecting minority communities on campus and are in touch with current issues.”

Wake Forest Hillel likewise applauded the resolution’s success on Monday, calling it an embrace of the “Pro Humanitate” spirit — a reference to the university’s motto, which means, “For Humanity” — and “a clear statement that antisemitism is not and will never be welcome in our campus!”

Gabriel Frank Benzecry, the group’s president, expressed his own pride in a statement, saying the bill’s passage was “proof that when people work together, change and justice will come.”