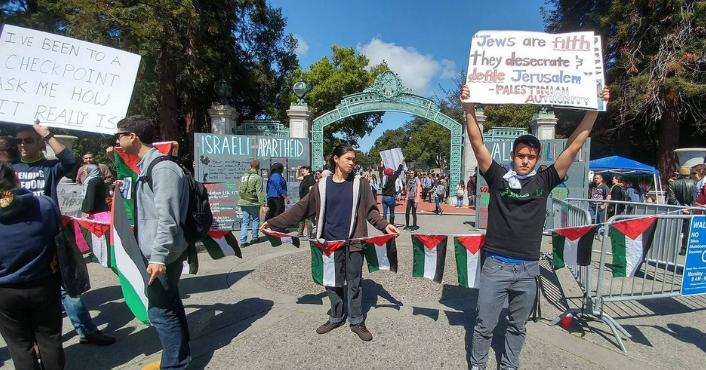 Officer tasked with civil rights says “there has never been a better time to be a Jewish student in higher education than the 21st century,” but concedes that “everybody needs to open their eyes to the reality of the anti-Semitism that we’re seeing on American college campuses.”

Kenneth L. Marcus was confirmed last summer by the US Senate as assistant secretary for civil rights at the US Department of Education following a contentious nomination battle by Democrats and left-wing and anti-Israel groups. In the job for a year now, his duties include enforcing civil rights laws prohibiting educational institutions from discriminating based on race, color, disability, ethnicity, national origin and age.

From 2004 to 2008, he was staff director of the US Commission on Civil Rights and was delegated the authority of his current role.

From 2011 to 2018, Marcus, 52, served as president and general counsel of the Louis D. Brandeis Center for Human Rights Under Law, whose mission is to fight for civil and human rights for Jews and others.

He also taught at the City University of New York’s Baruch College School of Public Affairs.

Marcus and his wife, Stephanie, have one daughter.

JNS talked with Marcus in person. The interview has been edited for brevity and clarity.

Q: Describe the biggest issue or issues you have faced as it pertains to anti-Semitic and anti-Israel sentiment on college campuses.

A: We face a lot of issues. The anti-Semitism issue is a bit smaller. We get 10,000 to 15,000 cases per year, but we only get a handful of anti-Semitism complaints—certainly far less than 1 percent of our complaint load. So I would say that the No. 1 issue is the cases we don’t get. The fact that we are aware anecdotally and through survey data that there are many Jewish students to feel they are experiencing anti-Semitism, and yet very few of them are submitting complaints to the Office for Civil Rights (OCR). One of the issues for us is awareness, and that is part of why I’m so pleased to be speaking with you now.

We do have some alleging systemic hostile environments for Jewish students, some of which relate in some fashion to Israel. We do get some complaints alleging discrimination in admissions by Jewish students who believe that they were rejected by highly selective institutions that are admitting similarly situated non-Jewish students

Legal complaints raise lots of different issues, technical as well as substantive, so that they’re not all turning on these sorts of policy issues that one reads about. I would say that the challenge is to identify the cases in an environment where we’re not getting so many complainants, and then to make sure that when we get the cases that they’re properly founded in fact and law.

Q: Why do we see fewer cases? Is there a discrepancy between the anecdotal evidence and number of cases?

A: For several years, I was fighting anti-Semitism from the Louis D. Brandeis Center, where our mandate was, in large part, to address campus anti-Semitism through law and public policy. We found that there were some students who were willing to step forward, but there were lots of reasons why students may not be willing to do so.

First, even advocates aren’t always in touch with the students who face the problems. And you can’t deal with what you don’t see.

Second, some students are reluctant to step forward for fear of retaliation or concern about social stigma, or because they worry about the time and distraction from their studies or for some other reasons. We’ve also seen students and families who were concerned that it might seem disloyal to their college to file an external complaint of any sort.

So there are lots of reasons people might not come forward. That’s also true, of course, of non-Jewish complainants in another area of the law. But when you look at the data on student perception of anti-Semitism and the anecdotal, and you see the divide between those experiences and the small number of complaints, you have to think that there are a large number of students who feel that they have an issue that needs to be resolved but who have not come forward. There’s a significant role for Jewish communal organizations to identify these students, and to counsel them and to help figure out what process is appropriate.

Of course, there are times when it’s best not to go directly to the federal government and instead to work things out on one’s own campus. Sometimes, it’s not a bad thing if students are working things out amicably. But we can’t solve problems that are not brought to us.