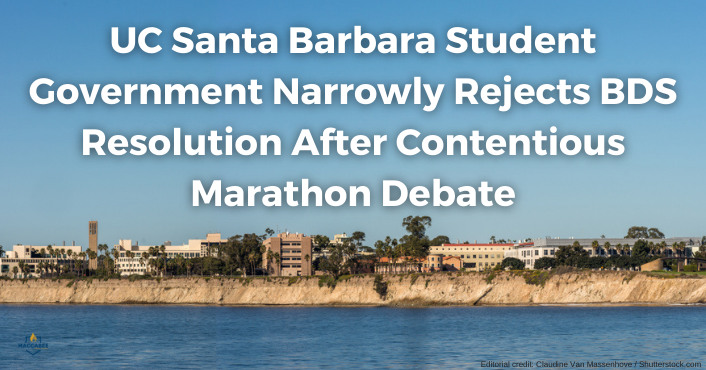 University of California Santa Barbara (USCB)’s Associated Student Senate on Thursday narrowly voted against a resolution to divest university funds from companies that it argued profit from “human rights abuses and violence” against the Palestinians, after a contentious overnight debate.

The vote entered the senate at approximately 7:50 pm Wednesday night and lasted nearly 11 hours. After a public forum session that included statements from over 100 students, faculty, and community members, student senators unsuccessfully motioned to indefinitely table the resolution. The resolution was then rejected by a single margin vote in a 12-13 secret ballot, at 6:37 am, according to Daily Nexus reporter Holly Rusch, who had been live-tweeting the vote.

Hillel Santa Barbara Rabbi Evan Goodman and Executive Director Robert Ingrum praised the outcome in a statement, saying, “We are extraordinarily proud of our students for their resolve and integrity in the months, weeks and days leading up to tonight’s vote. After an exceptionally trying year of distance and isolation, they gave everything they had to fight this anti-Israel resolution.”

The statement also called the overnight session’s atmosphere “hostile,” relaying that one speaker shouted, “‘Israel isn’t a real State’ and ‘F… Israel’ which caused the senate chair to suspend the meeting while that person was removed.” Eventually, USCB’s Senate “abruptly halted” their Facebook Live Chat of the event after a litany of derisive comments against Goodman.

The bill “A Resolution to Divest from Corporations Violating Palestinian Human Rights,” made no explicit mention of the Boycott, Divestment and Sanctions (BDS) movement, but would have “direct[ed] the UC Regents to withdraw investments in securities, endowments, mutual funds and other monetary instruments with holdings in any of the aforementioned companies or subsidiaries thereof.”

The authors listed, “Boeing, Caterpillar, General Dynamics, General Electric, Lockheed Martin, Northrop Grumman, and Raytheon” as companies that have “violated the universal right ‘to life, liberty, and security of person’ [of the Palestinians] … as stated in the United Nations Declaration of Human Rights.”