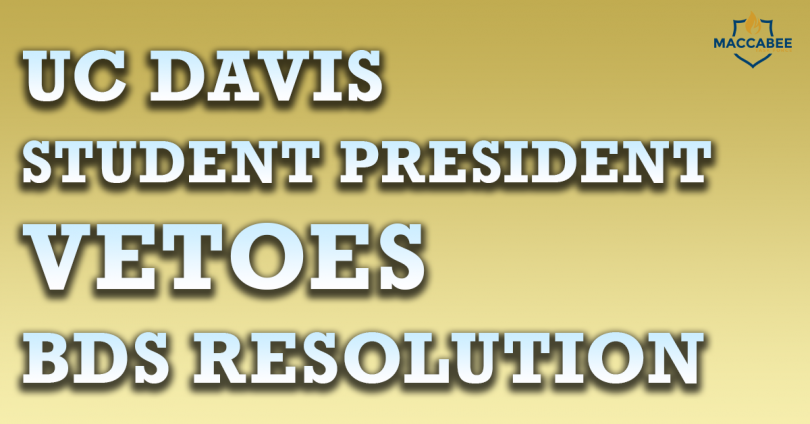 The UC Davis student president vetoed a boycott, divestment and sanctions (BDS) resolution on June 5 that the student senate passed the night before.

Kyle Krueger, the Associated Students, University of California Davis (ASUCD) president, said in a statement that he had decided to veto the resolution, Senate Resolution (SR) 25, because most of the Jewish community on campus have been outraged over it.

“This resolution was problematic because it included minimal to no input from the Jewish community beforehand,” Krueger said. “An overwhelming majority of Jewish students at last night’s Senate meeting expressed their hurt and frustration with SR #25, and every Jewish student I have spoken with since the resolution’s passage has expressed to me the hurt SR #25 has brought upon them and their communities. The resolution has been widely condemned by Jewish students of many different sects/beliefs who feel marginalized by ASUCD and its actions.”

The ASUCD president added that the campus doesn’t have a good history regarding anti-Semitism, citing a September 2019 article highlighting how there had been two instances of neo-Nazi flyers on campus in less than a year.

“We must do more to work with the Jewish community to address this incredibly prevalent and important issue,” he said.

Krueger acknowledged that the ASUCD needs to recognize Palestinian rights and voices as well, but should not alienate the Jewish community in doing so.

“A divisive resolution about an international conflict that we have little control over is never worth sacrificing our ability to collaborate on more directly impactful initiatives — such as expanding basic needs programs for students, or increasing inclusion and diversity in the association,” Krueger said.

He concluded his statement with a call for Jewish and Palestinian students to form a consensus on a resolution going forward, one that is more specific in calling out companies engaged in human rights abuses.