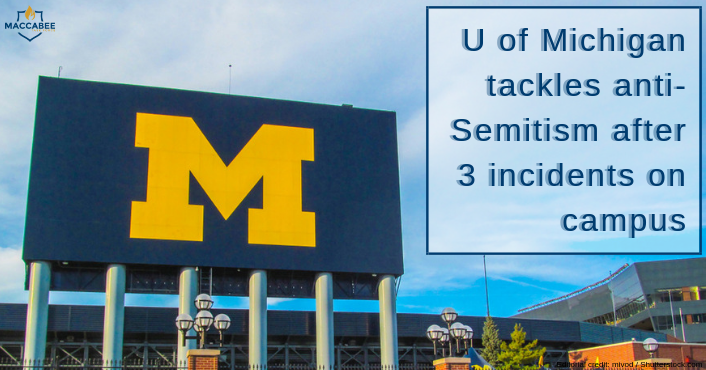 “Michigan faculty have repeatedly singled out the Jewish state in a way that clearly crosses the line from legitimate criticism of Israel into the anti-Semitic demonization of Israel,” Brog said. “And like all anti-Semitic attacks, they have left Jewish students feeling threatened and besieged.”

Brog added: “What’s even more disturbing is the fact that such anti-Semitic incidents are in no way limited to the University of Michigan — they are becoming increasingly common on campuses across the country.”

The University of Michigan has been accused of having an anti-Semitism problem after at least three separate incidents involving Jewish students on campus.

Last week, during a mandatory lecture for art students, Emory Douglas, who was the Minister of Culture for the Black Panther Party decades ago, showed an image of Adolf Hitler next to Benjamin Netanyahu, the Israeli prime minister, with the words “Guilty of Genocide!” across his face.

At the time, the university defended the guest lecturer, who featured the image alongside other depictions supporting BDS and showing pro-Palestinian propaganda.

Alexa Smith, a senior at the public school who exposed the incident on Facebook, wrote: “In what world is it ok for a mandatory course to host a speaker who compares Adolf Hitler to the Prime Minister of Israel?

“As a Jew who is proud of my people and my homeland, I sat through this lecture feeling targeted and smeared to be as evil as the man who perpetrated the Holocaust and systematically murdered six million Jews.”

The lecture was sandwiched in between two incidents where instructors rejected letters of recommendation for students wanting to study in Israel.

Earlier this month, it emerged that anti-Israel professor John Cheney-Lippold, who was recently tenured, refused to write a letter of recommendation for student Abigail Ingber, because she was wanted to study in Tel Aviv, citing his support for BDS [Boycott, Divestment, Sanctions movement].

Cheney-Lippold rejected the notion his actions were anti-Semitic, but the university disciplined the digital studies professor and called it “inappropriate” behavior.

Ingber’s father wants the university to fire him, calling the move “manipulative” given that Cheney-Lippold agreed to write the letter, received tenure, and then rejected his daughter’s letter after he was essentially immune to punishment. Cheney-Lippold was subsequently told he won’t get a merit increase for the next academic year and cannot go on his planned sabbatical in January or another one over the next two years as punishment.

On Tuesday, it was revealed that a second student, Jake Secker, had his letter of recommendation rejected by his graduate student instructor, Lucy Peterson, in what appeared to be a carbon copy of the Cheney-Lippold message.

Smith and Secker met with university officials who apologized to them and said they are “cautiously optimistic” about the outcome.