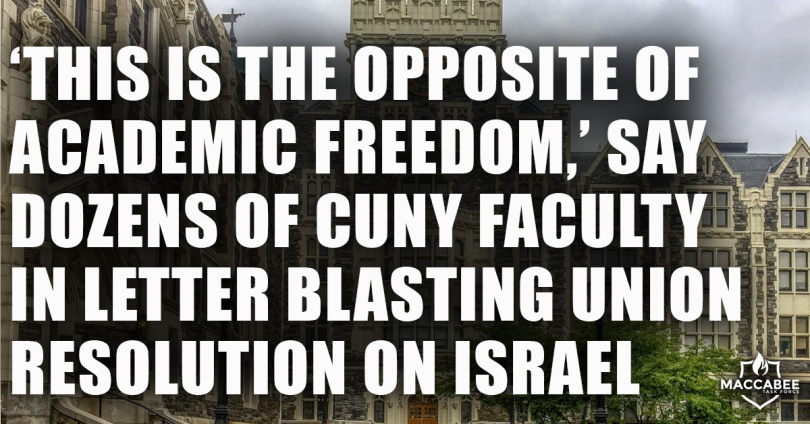 At least 39 Jewish studies faculty at the City University of New York (CUNY) condemned a controversial faculty union resolution that charged Israel with “apartheid” and advanced the prospect of a boycott of Israeli institutions, according to a letter seen by The Algemeiner.

The faculty letter, sent Tuesday morning, was authored in response to a June 10th resolution passed 84 to 34 by the public university system’s Professional Staff Congress union (PSC-CUNY), which accused Israel of perpetrating the “massacre” of Palestinians and planned chapter-level discussions on supporting the Boycott, Divestment and Sanctions (BDS) movement.

“As teachers and scholars of Jewish Studies, we consider the right to academic freedom — the ability to engage in intellectual debate, research, and exploration without fear of retaliation — to be fundamental to all of our endeavors,” the letter said.

In calling for chapter-level discussions on adopting the BDS movement, it said, the letter “appeals to freedom of speech only to silence it by advancing a movement that explicitly advocates for academic boycott of Israeli academics and those employed by Israeli institutions.”

“This is the opposite of academic freedom and the fundamental tenets of free speech,” it continued. “Peace and justice are born out of dialogue, discussion, conversation, and mutual understanding.”

It also condemned a national rise in hate crimes generally, as well as the recent spate of antisemitic incidents across the US — which it said “frequently correlate to anti-Israel rhetoric.”