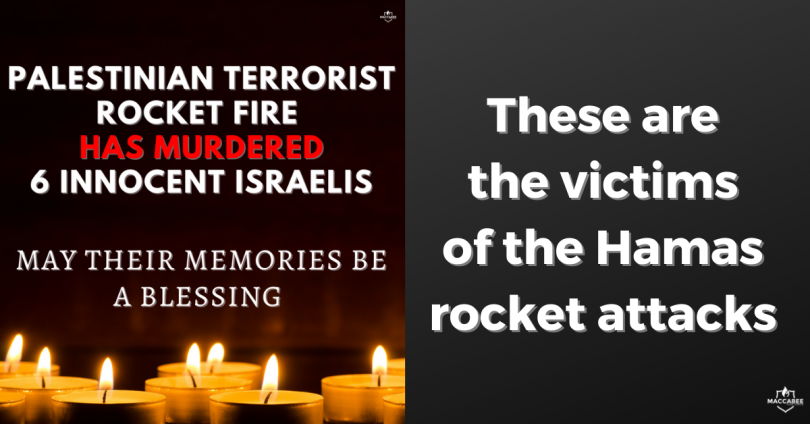 An unprecedented escalation in violence between Israel and Gaza has left many Israelis – in a constant state of uncertainty, wondering if they will get the chance to see tomorrow.

An unprecedented escalation in violence between Israel and Gaza has left many Israelis – especially those living further South – in a constant state of uncertainty, wondering if they will get the chance to see tomorrow.
Six Israelis have already paid the ultimate price as tensions continue to brew.

Leah Yom Tov, 63; Khalil Awad, 52, and his daughter Nadin, 16; Soumya Santosh, 30; Nella Gurevitz, in her 80s; and Omer Tabib, 21, had their lives stolen from them and their loved ones by terror groups in the Gaza Strip, as each fell victim – one by one – to one of the more than a thousand rockets fired into Israeli territory from inside the coastal enclave.

One of the first two victims claimed by the Hamas rocket barrage, Santosh was a caregiver from India for Gurevitz, who was also killed in the blast.

Santosh was from the Idukki district in the Indian state of Kerala, and had been working in Israel for seven years, according to relatives quoted by the Press Trust of India (PTI) news agency.

According to the PTI report, Santosh was talking to her husband in Kerala via a video call when a rocket struck her building.

“My brother heard a huge sound during the video call. Suddenly the phone got disconnected,” Santosh’s brother-in-law, Saji, told PTI.

Santosh leaves behind her husband and a son.

Indian media reported extensively about Santosh’s death, including a conversation held by Ambassador to India Ron Malka with her family.

“The whole country is mourning her loss and we are here for them,” Malka tweeted.

Gurevitz was the second person killed by a rocket that directly hit Ashkelon. She was in her apartment with her husband when the attack occurred.

She leaves behind her husband, who is still hospitalized from the attack.

Yom Tov was killed on Tuesday night after a rocket landed directly on her home in Rishon Lezion.

Her children, who spoke to Israeli media this morning, said that they heard the alarm and saw that the rocket was heading toward western Rishon. They attempted to call their mother, but the line was busy.

Eventually they found out from neighbors that rescue teams were already at the house after it had been struck by a rocket.

“There are other families currently paying a heavy price as well – it is part of our reality and part of life in the country,” her sons said.

“Although we have not digested [this news] at the moment, we can say clearly and sharply ‘we will move forward’, we are a Yom Tov family and we are with Israel, despite the difficulty, pain and prices.”

Khalil Awad and his daughter Nadin

Awad and his daughter Nadin were Arab-Israeli residents of a town near Lod, who were killed after a rocket scored a direct hit on a car early Wednesday morning.

The rocket struck Lod as the mixed Jewish-Arab city was shaken by violent riots throughout the night and brought the death toll in Israel up to five since the fighting began on Monday.

Tabib was an IDF soldier from the Elyakim moshav. He was killed by an anti-tank missile near the Gaza Strip. An IDF officer and another fighter were lightly and severely wounded in the incident.

He is survived behind his parents, Tali and Amir, and his little brother. Those that knew him said he was social, open and had a sense of humor.

Tabib was set to be released from the military next month. He was 21 years old.