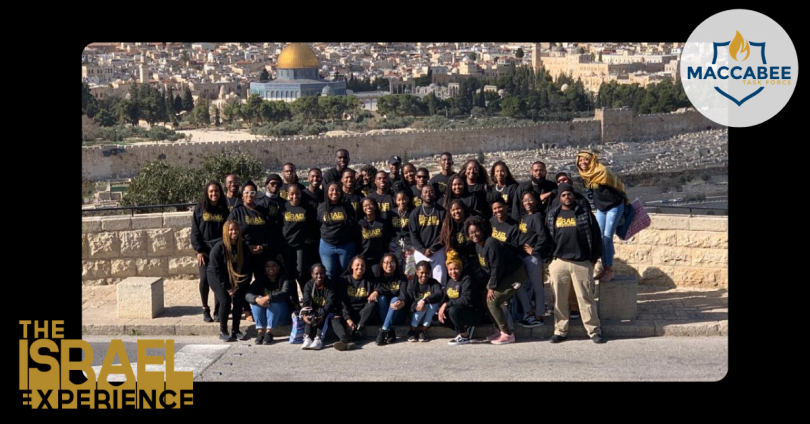 This month, the Maccabee Monthly Update – The Israel Experience was written by MTF activist and intern, Marvel Joseph.  Marvel is a first generation Haitian American, and is a graduating senior from Florida Atlantic University

The students returned with a deep connection to Israel and a love for its people.  I believe this connection will last a lifetime.

My connection to Israel was forged by both history and personal experience.  Historically speaking, during World War II, Haiti opened up its borders to European Jews seeking asylum from Nazi Germany. Then, during the UN vote for partition, Haiti casted the deciding vote creating the new Jewish state of Israel.

Personally, and most memorably for me, after the 2010 earthquake in Haiti, Israel was one of the first countries to send aid to the country. In a natural disaster that impacted many of my family members, I promised myself that I would always strive to help Israel and its people the same way it had set out to help my own. This past year, I had the opportunity to connect others to Israel by serving as an intern for Maccabee Task Force.

As we all know, anti-Israel groups are very effective in building campus coalitions. They are quick to stand in solidarity with minority student groups, support their causes, and become their friends. Then, in a clear quid pro quo, they ask these groups to join them in their anti-Israel hate.  This is how we have continuously lost the battle on campus. We are determined to change this dynamic.

To do so, we took action. This past winter, we organized and led our first ever Maccabee Task Force trip of African American student leaders to Israel. This trip of forty participants consisted of student leaders from around the nation representing eight universities.

Each day in Israel was challenging; students have a hard time waking up at 6am every morning while jet-lagged.  But the experience was transformative.  Each activity and speaker provided the group with a perspective that books or articles simply cannot provide. Whether it was meeting with African asylum seekers in Tel Aviv, Ethiopian Jewish children in Rishon Lezion, or even when we experienced what life was like for the communities of Netiv Ha’asarrah, every part of the country and its people offered something immediately relevant to our students.  Israel proved that it truly does have a story for everyone.

The students returned with a deep connection to Israel and a love for its people.  I believe this connection will last a lifetime.  Together, we have begun furthering our relationships with both the students and their universities in an effort to bring their experience and connections to Israel to the larger student body.  And, despite the setbacks of the Coronavirus, we are using our first partners to help recruit for future trips. The African American and Jewish communities have so much in common.  There is enormous potential to build a much deeper relationship.  We can and we will turn this promise into a reality.