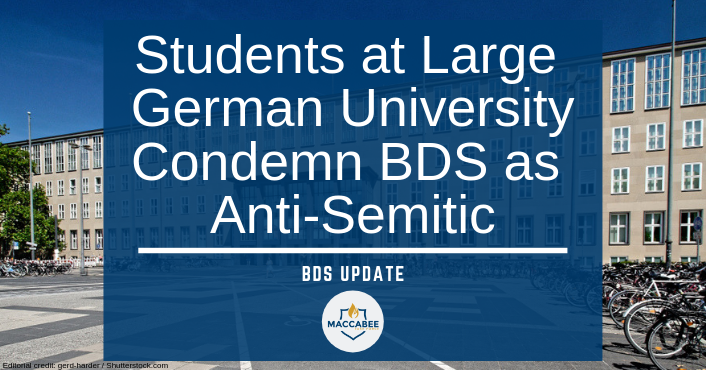 The University of Cologne, located in the state North Rhine-Westphalia, has a student body of nearly 49,000.

The University of Cologne’s student parliament passed a resolution against the Boycott, Divestment, Sanctions campaign targeting the Jewish State because BDS is an antisemitic movement that seeks to abolish Israel.

The student parliament and the AStA are working to prevent BDS propagating events at the University of Cologne. ”AStA stands for The General Students’ Committee, a student representative organization on German universities.

The University of Cologne, located in the state North Rhine-Westphalia, has a student body of nearly 49,000. The student parliament resolution wrote “AStA is invited to advocate the university for a ban on university-connected events that are related to the BDS, or otherwise attempt to delegitimize the State of Israel. ” The text added.

“The student parliament also condemns antisemitism in relation to the state of Israel in any form. It sees itself as being in solidarity with the State of Israel, which also means that its right to existence and self-defense is beyond question. ”In the two-page resolution, the students outlined the expressions of contemporary antisemitism. According to the resolution, “

Modern antisemitism is often directed against the state of Israel. There are several attempts to delegitimize the existence of the state of Israel from the fact that the founding of the state has already been ‘unlawful. ’ And followed by the statement that Israel is the authoritarian and racist state par excellence, to assertions denigrating Israel as an ‘apartheid state. ’”The students wrote.

In many political, social and especially media contexts, the state of Israel is often judged or treated differently than other states. ”Read More: Jerusalem Post