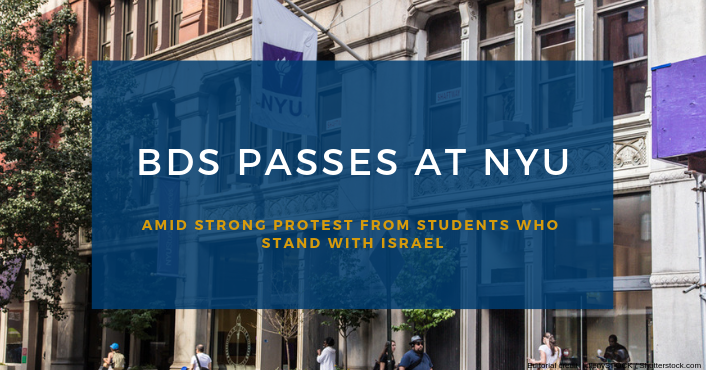 Student Senators passed a resolution that would have NYU divest from three companies associated with the Israeli government and institute a “socially responsible” investment policy.

A resolution that would have NYU divest from companies associated with Israel and institute a socially responsible investment policy passed on Thursday. Of the 63 members of student government voting, 14 abstained, 14 voted no and 35 voted yes.

At least a hundred students crowded the Colloquium Room on the fifth floor of the Global Center for Academic and Spiritual Life, with another large crowd left waiting outside. Many of the students were from the pro-Palestine group Students for Justice in Palestine or the Zionist group Realize Israel. The latter group had a large presence, as many members of Realize Israel remained outside, chanting as the meeting progressed.

The students came to see the result of the “Resolution on the Human Rights of Palestinians,” presentedby Senators at-Large Rose Asaf and Bayan Abubakr and Alternate Senator at-Large Leen Dweik.

At the start of the meeting, the three presenters explained the resolution once more and preemptively addressed counter arguments they expected to hear. According to the senators, although inspired by the Boycott, Divestment and Sanctions movement, the resolution simply seeks to use Israel as a case study for how NYU can divest from those violating human rights.

“This resolution is for the human rights of all.” Dweik said. “We want to know that our tuition money is not being spent to kill brown people across the world.”

Six students for and against the resolution spoke at the meeting, with each one allotted two minutes time.

The first person to speak against the resolution was GLS sophomore Benjamin Reich, who said he believed the resolution was clearly connected to the BDS movement, which makes him feel unsafe on campus as a member of the Jewish community.

Political Action Chair for the Black Student Union Dylan Brown spoke second for the resolution. Brown mentioned that the struggles of black people in the United States cannot be separated from those of the Palestinian people.

“This body has a duty to all marginalized students on this campus to not be invested in systems of oppression,” Brown said.

The meeting was extended four times, first until 6:30, then 6:45, then 7:00 and finally 7:20 p.m. Still, some senators and attendees expressed they felt there was not enough time to debate such a complex issue. One senator noted that they had the resolution for more than a month, which he felt was more than enough time. President of Realize Israel Adela Cojab, who was given speaking time by a senator, expressed that she did not feel that there had been enough time for members of the NYU community to speak their minds to student government.