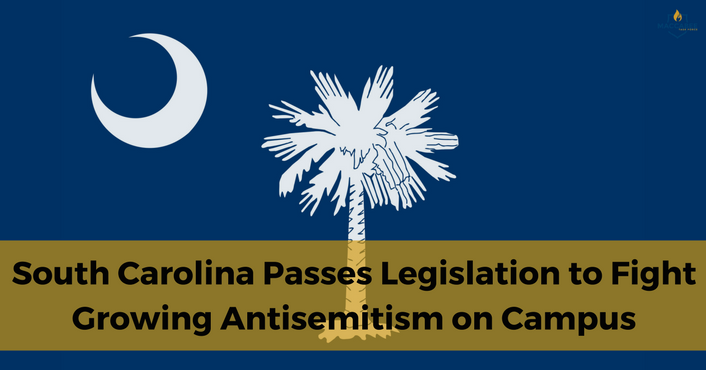 The legislation defines antisemitism as including calling for attacks on Jews, blaming Israel for all political tensions, and denying its right to exist.

CHARLESTON – South Carolina has become the first US state to pass legislation to fight antisemitism on campus, after supporters of the measure said it would help colleges battle discrimination amid growing numbers of such incidents nationwide.

The bill passed the South Carolina House by 86 votes to 4 late on Wednesday. Its sponsor, Republican Representative Alan Clemmons, said its passage showed the state was “leading the fight against antisemitism.” Opponents of the measure said they thought it went too far into censoring critics of Israel’s government.

Governor Henry McMaster was expected to sign the measure into law when it reaches his desk, a spokesman said.

The number of antisemitic incidents in the United States surged by 57 percent last year, the Anti-Defamation League said in February. The advocacy group said that marked the largest single-year increase on record.

The legislation defines antisemitism as including calling for attacks on Jews, blaming Israel for all political tensions, and denying its right to exist. Opponents of the bill had argued it trampled on free speech and could stifle academic debate.

The bill says colleges must consider its definition of antisemitism when investigating allegations of discrimination on campus.

While Tennessee has similar legislation pending, no other state has passed a law like the one in South Carolina, according to Sunny Deye, education program director for the National Conference of State Legislatures.

South Carolina Democratic Senator Brad Hutto, who opposed the bill, said its proponents were trying to inject the state’s lawmakers into a foreign policy debate.

Joe Cohn, legislative and policy director for the non-partisan Foundation for Individual Rights in Education, said the legislation would insert “a tremendous amount of censorship onto college campuses around discussions of Israel and its policies.”

But Clemmons, the bill’s sponsor, said it was long overdue.