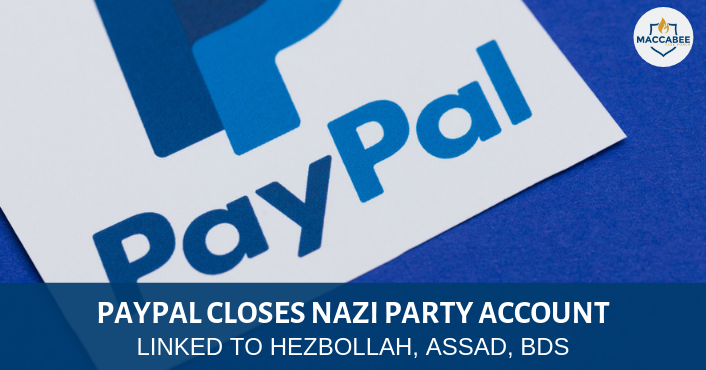 The US-based online payment service PayPal has shut the account of The Third Way, a neo-Nazi party, after a series of Jerusalem Post articles revealed the German group’s links to Hezbollah, Syrian President Bashar Assad and support for the anti-Israel boycott, sanctions and divestment movement.

In May 2017, the Post reported that the website of the Third Way published a report in April on a visit by its members to Lebanon to champion Hezbollah’s war against Israel.

Members of the extremist group can be viewed on their website visiting the Hezbollah propaganda museum called Where the Land Speaks to the Heavens in the village of Mleeta in southern Lebanon. Kai Zimmermann, a senior leader of Der Dritte Weg, posed next to a plaque reading, “No, Israel is not invincible.” The neo-Nazi group labeled Israel a “terror state” on its website.

The US, the Arab League, Canada, the Netherlands, and Israel classify Hezbollah’s entire organization a terrorist entity. The European Union, including Germany, merely proscribed Hezbollah’s so-called “military wing” as a terrorist group in 2013.

The Third Way, whose goal is the creation of “German socialism,” wrote on its website: “What every person can do against the Zionist genocide.” The neo-Nazi group supports the BDS movement against the Jewish state.

German intelligence officials in the state of Baden Württemberg wrote in a 2018 report that propaganda from the Third Way calling to boycott Israeli products “roughly recalls similar measures against German Jews by the National Socialists, for example, on April 1, 1933 (the slogan: ‘Germans! Defend yourselves! Don’t buy from Jews!’)”

A graphic on the Third Way’s website states: “Boycott products from Israel: 729=Made in Israel.” The number 729 is used in bar codes to identify Israel-based products and companies. The intelligence agency for the state of Rhineland-Palatinate wrote in its 2018 report: “The Third Way’s slogan ‘Boycott Products from Israel’… betrays significant parallels to the anti-Jewish agitation of the National Socialists,”.

According to the organization’s website, members of the Third Way met with the extremist Syrian Social Nationalist Party in Lebanon and representatives of the Bashar Assad regime in Syria.

German intelligence reports in 2018, which were reviewed by the Post, documented the radical antisemitic and xenophobic activities of the organization…