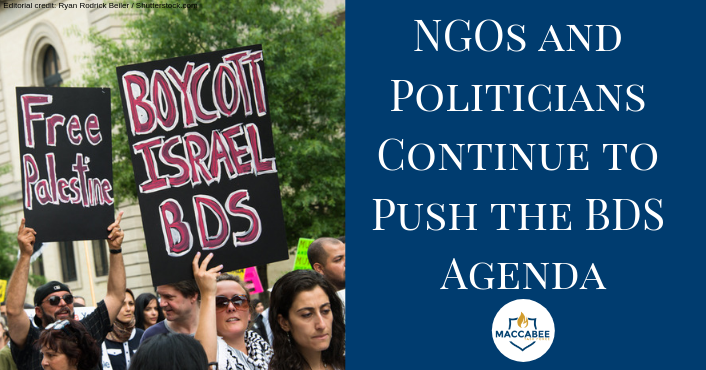 In February, the Israeli Strategic Affairs Ministry released a report demonstrating that leading BDS groups are staffed by current and former members of Hamas and the Popular Front for the Liberation of Palestine. These organizations include Addameer, the Palestinian Center for Human Rights, Al-Mezan, and Al-Haq, which regularly support BDS in international legal and “human rights” contexts, and receive financial support from the European Union.

BDS supporters framed the report as an exaggeration that slandered the movement and its Palestinian partners. Overall, the report received limited press attention, despite the detailed information provided on the abuse of NGOs by terror organizations. This suggests that the BDS movement has achieved a level of acceptance within the information ecosystem that is tantamount to impunity. A social media researcher who discovered that bots from hijacked accounts were generating tweet storms supporting BDS revealed one reason for this normalization — sheer volume.

Another development that showed the leading role of non-governmental organizations in pushing BDS was the campaign by Amnesty International alleging “the Israeli government has political and ideological reasons for developing a tourism industry in occupied East Jerusalem and Area C of the West Bank.” The Amnesty report alleged further that Israel used archaeology “to make the link between the modern State of Israel and its Jewish history explicit,” and went on to accuse travel companies of complicity in “human rights violations” for listing sites and accommodations in places including Jerusalem.

The Amnesty campaign against tourism in Israel follows on the Human Rights Watch-instigated decision by Airbnb to de-list Israeli-owned properties in communities across the “Green Line” — but that went even further by denying Jewish connections to Jerusalem and other sites. Human Rights Watch’s devolution into a BDS support group has long been evident, but the vehemence of its current position is partially the function of its director’s obsession with Israel, along with those of key staff members who originated in the BDS movement. The ACLU has followed a similar trajectory in allowing its antipathy towards Israel to shape its policy regarding anti-BDS legislation.

In February, the controversies over antisemitism among newly elected members of the US House of Representatives expanded. Recently-elected Representative and BDS supporter Ilhan Omar expressed the belief that Jewish money was influencing Congressional support for Israel and scoffed at the idea that Israel was a democracy. Her own financial backers include a variety of individual BDS supporters and organizations. Faced with harsh criticism, Omar issued a putative apology that redoubled criticism of alleged lobbying by AIPAC and other organizations.

In another incident, Representative Rashida Tlaib accused supporters of anti-BDS legislation of dual loyalties, stating, “They forgot what country they represent.” Tlaib was also criticized by Democratic House Foreign Affairs Committee chair Elliot Engel for refusing to participate in a non-partisan fact-finding trip to Israel sponsored by AIPAC. In response, Tlaib’s supporters rebuked Engel as “patronizing” toward a “woman of color.”

BDS supporters expanded the criticism and alleged that coverage of antisemitic and conspiratorial remarks by Omar and Tlaib constituted “white supremacy,” and that like anti-BDS legislation, they were part of a plan to undermine the Democratic party. There were also public demands that American Jews “stand with” Omar, the implication being that those who insist on calling out her antisemitism were right-wing racists.