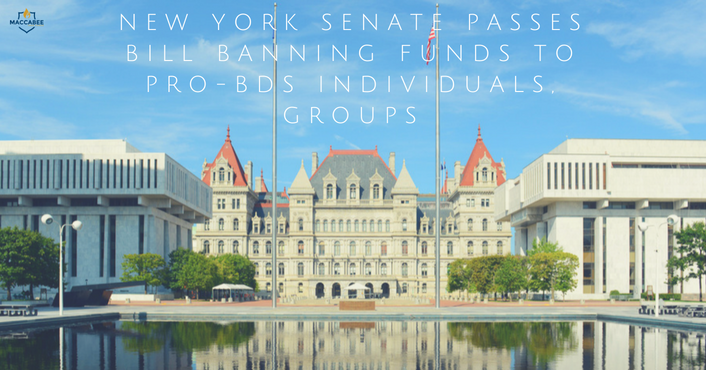 The New York Senate overwhelmingly passed a bill on Monday that would bar the state from investing in or contracting with any business, individual or organization engaging in the boycott, divestment and sanctions movement against Israel.

State institutions are currently barred in New York from directly taking part in a boycott against allied countries, but the current bill, which still needs to pass the Assembly before going to the governor, would extend the ban to prevent contracts or investments to pro-BDS non-state entities.

“New York has no business funding an economic war against Israel, or other allied nations, by conducting business with its enemies. It’s an inappropriate and offensive use of taxpayer dollars,” bill sponsor Elaine Phillips (R-Manhasset) said in a statement. “This measure extends existing state law to combat the Boycott, Divestment and Sanctions (BDS) movement, which seeks to advance anti-Semitic, anti-freedom and anti-capitalistic principles. I urge the Assembly and Governor to take action on this important bill immediately so New York can follow suit with other states and end this practice.”

Officials said they would use “publicly available information” to create a list of “companies, organizations, or other entities that have engaged in or promoted boycotts of American allies.”

The bill, which was cosponsored by Borough Park Senator Simcha Felder, passed 56-6.

It was not immediately clear when the Assembly may vote on the bill.

Advocacy group Palestine Legal described the bill on their website as creating a “state-sponsored blacklist of individuals, organizations, and companies,” and vowed to fight the legislation from being enacted into law.