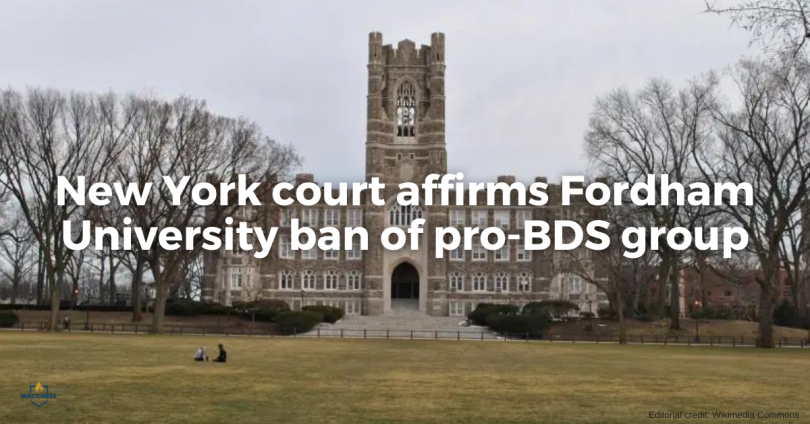 “A wise and courageous decision not to allow SJP, an antisemitic hate group, to establish a charter”

The Bronx-based Fordham University prevailed in its legal case over the pro-BDS organization Students for Justice in Palestine (SJP) in connection with the State of New York’s highest court rejecting SJP’s appeal.
Brooke Goldstein, executive director of The Lawfare Project, an organization that works to advance the rights of the Jewish community and promote Israel’s security, said on Wednesday that it “is proud to have provided legal support for an amicus brief that was submitted to the court in support of Fordham University. This marks the first time that a university has shown the courage to reject SJP.”
She added that “As we’ve previously shared, administrators at Fordham University made a wise and courageous decision not to allow [SJP], an antisemitic hate group, to establish a chapter on campus. Presumably angry that they would not be allowed to push their agenda of Jew-hatred, SJP sued Fordham, alleging that its decision was ‘arbitrary and capricious.”’
Goldstein termed the SPJ legal victory with a lower court as “short-lived.”
She continued that “Despite pressure from more than 100 Fordham University professors and several civil rights groups not to pursue an appeal, Fordham appealed the decision and won. Last month, SJP’s attempt to appeal that decision was thwarted when the highest court of New York refused to consider the appeal. This means that the court’s decision upholding Fordham’s right to reject SJP’s application to establish a charter on campus is final.”
The Jerusalem Post reported on the SPJ case against Fordham University in 2019.
A New York judge issued a now defunct decision ordering Fordham University to recognize the pro-BDS student group Students for Justice in Palestine.
In the 21-page legal ruling by judge Nancy M. Bannon, the jurist largely argued that Fordham’s failure to recognize the SJP was a matter of academic freedom and violated the university’s rules about the formation of a student group.
Read More: Jerusalem Post