August 14, 2018 AntisemitismStudents for justice in Palestine 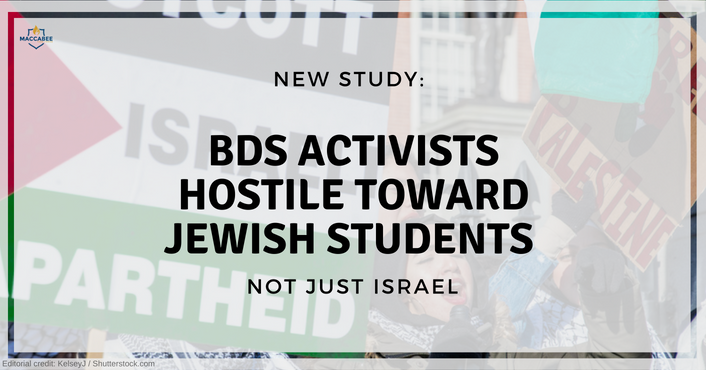 For many years we’ve been documenting anti-Israel activity on U.S. university and college campuses, typically part of the Boycott, Divestment and Sanctions (BDS) movement and carried out by student groups like Students for Justice in Palestine.

In these prior posts we’ve described many instances when this Israel-related activism has crossed over the line into blatant anti-Jewish animus, including at schools as diverse as Vassar, Oberlin, and University of Illinois.

It’s important to “unmask” the SJP student chapters, including how many of them launch attacks against Jewish and Zionist students, try to shut down programming about Israel and even Jewish-themed events and guest speaker events involving non-Jews that are hosted by Hillel and other Jewish campus groups, and deliberately work to ostracize and exclude pro-Israel students from various campus activities.

This new AMCHA study is important because it highlights how BDS isn’t only directed against Israeli academic institutions but also targets individuals for harm. As the report shows, an increasingly prominent feature of BDS on American campuses is not only the promotion of the boycott of Israel, but also the boycotting of actual Jewish students and student groups.

Below I summarize AMCHA’s latest study, “Zionism Off Our Campus!” Campus Antisemitism in 2017 (all page numbers refer to the online report). A statement from AMCHA’s cofounder and director is also included below.

The AMCHA Initiative is a Santa Cruz, CA-based non-partisan and non-profit organization that monitors and combats anti-Jewish activity on hundreds of college campuses across the U.S.

In several prior posts we’ve highlighted AMCHA’s studies and reports, including one that revealed a statistically robust correlation between BDS campus activism and acts of anti-Jewish hostility and another that found a clear association between faculty support for anti-Israel academic boycotts and an increase in campus antisemitism:

AMCHA’s latest 22-page study, which serves as its annual report, seeks to address a nagging shortcoming of its own previous studies on campus antisemitism and those produced by other organizations—like those issued regularly by the Anti-Defamation League, which like AMCHA also tallies incidents of anti-Jewish harassment, vandalism and assault occurring on U.S. college and university campuses (p. 3).