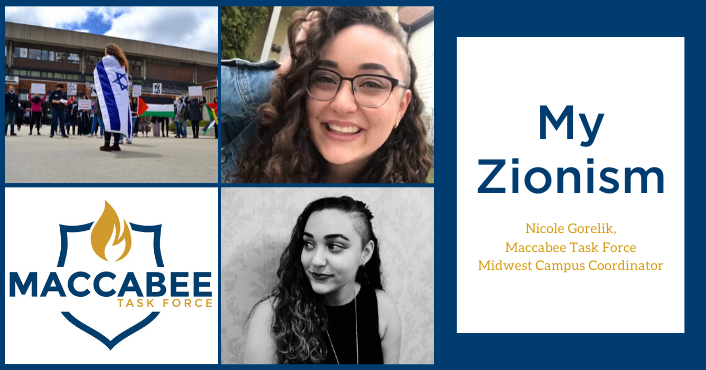 Before I began college at the University of Wisconsin-Milwaukee, I pictured my experience going one way: a lot of homework and exams, the occasional night out, and new friends along the way. All this proved to be true until about a month into my sophomore year. As I was walking through the Union on my way to English class, I was confronted by a group of marching students waving the Palestinian flag, displaying images of dying children, and chants of, “From the River to the Sea, Palestine will be free!”

I was shocked. I knew these images and chants were mere propaganda. I read the stories about Hamas using Palestinian children as human shields. Where was the opposition? People cheered them on as they called for Israel’s destruction. Where was the Israeli flag? Where were my fellow Jews and allies spreading our truth? I felt lost, as all I ever grew up hearing was the Zionist story—why Israel matters to me.  The Jordan River to the Mediterranean Sea is Israel. So why did it seem like I was the only one confused?

I did some more research. I was angry at Israel based on various things I read. I was also angry and frustrated that many sources simply omitted any trace of Jewish connection to the land. They characterized Israelis as colonizers and Zionism as racism. My Zionism has and always will be about Jewish self-determination—not racism. My Zionism has and always will be about my Belarussian relatives escaping Communist Russia and finding a safe haven in the only country that would open heartedly accept them. But as a Zionist, my heart hurt for Palestinians whose heart also lies from the River to the Sea and who want to share their story. Though uncomfortable for me to discover, considering it crushed my perfect view of Israel, I looked into the Palestinian story. I empathized, cried, and understood. I did the same for Israel, and for the Jewish people who once only dreamt and prayed of their return to the Holy Land, Eretz Yisroel.

I began to speak with my local Hillel, only to find out my campus did not have a pro-Israel student group. This made no sense to me and now I understood why there was solely one narrative infiltrating the student body.

After educating myself on a history I was not too familiar with, I felt it was important to start a campus movement that advocates for Israel, but also advocates for coexistence and encourages dialogue. Together with a close friend, we founded a pro-Israel club at UWM based on these values, a group which I led as president for two years.

Alongside my peers, we worked together to truly changed the campus climate by simply showing up. We would not only create campus-wide events but show up to listen to the other side. We wanted to learn and teach. However, the “other side” was not always willing to listen. I was brought to tears on several occasions because of the sheer hate people had towards me, simply because I advocated for Israel. Often times I was scared to table alone because of what people might say to me seeing me sitting by myself. I became the face of Israel on campus, helping to organize and host dozens of events, and most importantly exposed UWM to Israel as many times as I could.

While it’s easy to think about the challenges and missed opportunities, when I reflect on my journey, I love to focus on the positives. I think about the random students who thanked me and my team for our work. I think of the faculty that protected us during protests or ensured we had security at all events. I think about the member of the Muslim Student Association who actively reached out to grab coffee with me and listen to my perspective while I listened to his. I think about passersby who would see our Israeli flag and share stories about what Israel means to them.

For many students, however, their activism stops upon graduation day. For me, it became much more personal and led me to my current work with the Maccabee Task Force. My college experience inspired me to work for an organization that helps pro-Israel students create change by supporting initiatives that visibly leave a lasting impact. Through MTF, I meet students fighting for the same cause I fought for. I see pro-Israel students grappling with their support for Israel, as the popular thing to do on college campuses is to boycott it; but these students fight because they know their truth. Whenever I get the chance, I share that though criticism is not only healthy but necessary, Israel deserves to exist and I will never stop fighting for that. It isn’t easy being a pro-Israel college student these days, and I hope students feel supported every time we show up for them.