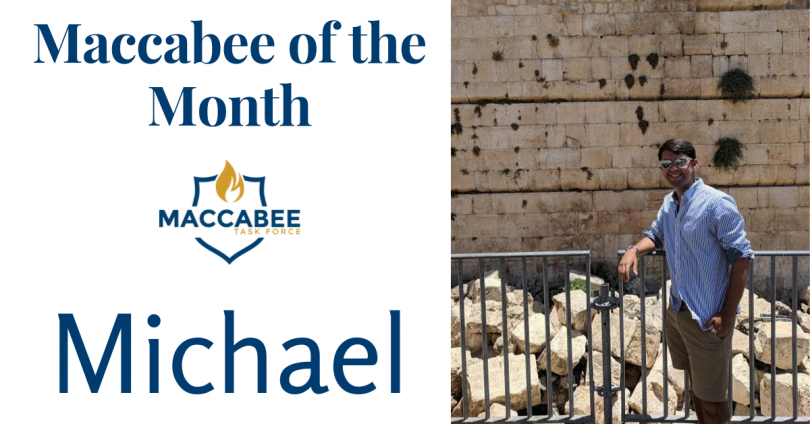 The school year is back in full swing and Maccabees across the US and Canada are back in their classrooms. That means they’re also back to making the case for Israel on their campuses, and we’d like to share with you an extraordinary student advocate for Israel.

This month, our Maccabee of the Month is Michael!

Michael is a junior at DePaul University and MTF has been fortunate to work with Michael throughout his time at DePaul. Last year, when anti-Israel students held an Apartheid Week on the campus quad, Michael led a week-long, peaceful counter protest so that these Israel haters could not dominate the quad unchallenged.  Whether he is engaging his fellow students, encouraging them to embrace their Zionism, or planning and executing impactful events, Michael is doing an impressive job of advocating for Israel on his campus. He is respected by his peers and does what he can to support them. His hard work is appreciated!

Here are some of the highlights from Michael’s interview.

What are the three most important things we should know about you?

First of all, I’m a double major in History and Political Science—I love learning about history, and it’s a major passion of mine. Secondly, I am proud to be a brother of Alpha Epsilon Pi, and at DePaul I’m the Jewish Heritage and Israel Engagement Chair. We have a great group of guys and we have a hell of a lot of fun. And lastly, I have an identical twin brother who is studying at the University of Iowa. He’s also a History major and also in AEPi, both coincidentally!

I’m most proud of the work that I’ve done for social and economic justice. I’ve always been involved in presidential campaigns, activist groups, etc. I think we have to step up and be a part of the change we want to see, and I’m proud of myself for doing my best to be involved in the political process.

I care about helping Israel because I believe in self-determination for the Jewish people. That is, in my view, the definition of Zionism. I’m a Zionist because I think that—as with any other people on Earth—the Jewish people should be able to live freely and independently in their own country. Israel is still a country being built, and we need to protect the progress we’ve made in its construction.

Personally, I’ve been an intern with the Jewish United Fund for 2 years now, and in that role and as Hillel President, I’ve done the best I can to create events about Israel and Zionism on campus. When we reach students where they are at, we can have important discussions about Zionism that I think are of the upmost importance.

What was your biggest takeaway from your trip to Israel?

For me, nuance is the key word that comes to my mind. We need to listen to all sides, listen to those we disagree with, and then move forward together. We need to get rid of the extremists and sensationalism and instead look at the key issues facing the people who live in the region.

At DePaul, BDS likely has a small but vocal base of support from Students for Justice and Palestine, and many students who are likely susceptible to BDS messaging because of the ways in which the BDS movement has coopted left-wing language. This also leaves Jewish students feeling excluded from left-wing politics on campus at times. We’re working hard to change that reality.

Maccabee Task Force has helped me and DePaul Hillel create a wide range of programs that reach students where they are most interested. We have created a sense of big-tent Zionism at DePaul, and with the help of MTF, we have been able to hold events that speak to students interested in a plethora of topics, including politics, religion, culture, music, language, sports, and much more. By engaging previously uninvolved students and supporting students on campus, we are growing the Zionist tent and we are building a Zionist movement.

What are you looking forward to most this semester?

I most look forward to meeting new students. I’m a junior now, and I am most excited to see new faces in the door. I love fresh energy and ideas and I want to help bring these students into the fold. The new students this year will be leading Hillel and AEPi and other Jewish groups soon, and I want to make sure we have as many involved as possible!