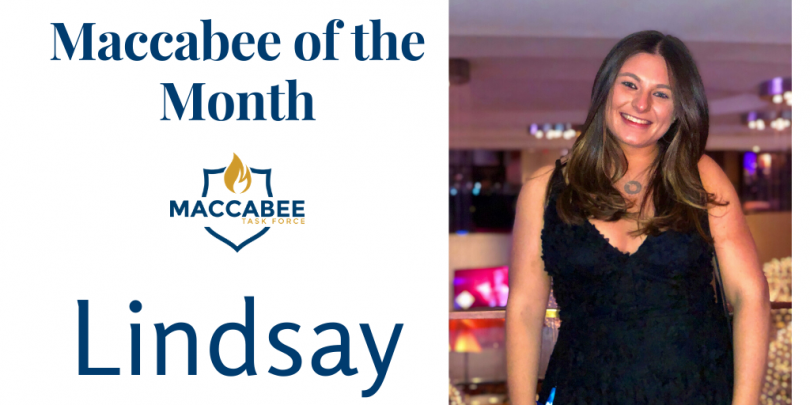 The Maccabee Task Force was created to combat the disturbing spread of anti-Semitism on college campuses. What’s the best way to achieve this? Having effective student leaders on the ground, in the trenches, doing the work. One of the best students we’ve ever worked with is our Maccabee of the Month, Lindsay.

Lindsay is the true definition of a Maccabee. She has worked tirelessly on her campus, Columbia University, to help support Israel for the last 4 years. She has battled BDS, educated student government leaders, hosted countless events, published articles, built relationships and taught those outside of the Jewish community why they too should support Israel.

Her passion and commitment to Israel has not ended there, however. Lindsay has just moved to Israel and enlisted as an IDF soldier. As she told us, “Israel is a huge part of my Jewish identity and when so much of the world is against Israel, it is so important for me to serve my country and do my part in protecting it from its enemies.”

From her incredible contributions on campus to her commitment to military service for the Jewish State, we applaud Lindsay with everything we have.

Three things you should know about me:

I love Raanana because it is my new home and it is close to both Tel Aviv (fun/party) and Jerusalem (spiritual).

I am most proud of my family and the Zionist community in which I was raised, who have always supported me.

Israel is a huge part of my Jewish identity and without this land, the Jewish people cannot be whole. If so much of the world is against us, it is crucial that we protect the land that protects us.

My campus harbors many anti-Israel voices, both those that are informed on the issues and more commonly, those that are not. The campus is very hostile towards Israel and there have been 4 BDS referendums proposed in the past 3 years. Many social justice related student groups have blindly allied themselves with the anti-Israel student groups, which makes the pro-BDS voice seem more prominent than it really is.

I have been an active member of SSI Columbia since my freshman year of college. I served in various positions on the board from Secretary, to Internal Relations, to Vice President. I have worked to build relationships with other students and student organizations, I have organized Israel events that concern members of the broader campus community to encourage them to engage with Israel. I have written op-Ed’s, spoken with student leaders, planned events, and acted as a strong pro-Israel voice on my campus. I have also fought the BDS referendum multiple times, engaging with student government officials as well as the larger campus community to discuss the problematic approach of BDS and the anti-Israel movement.

What was your biggest takeaway from your Fact Finder trip to Israel?

I recognized how important it is for us to meet students where they are. While we love Israel and want to highlight the amazing things that Israel is doing, most students will not respond well to this approach. Too many students have heard too many bad things about Israel for this to work. So we need to start off by teaching students that this issue is actually much more complex than they realize — far from black and white. Only then, after they have more open minds, can we teach more about the Israel we know and love.

The Maccabee Task Force has enabled us to take our pro-Israel activism to the next level. The Fact Finders Trip that MTF funded has built allies and momentum that have been critical to our efforts against the widespread anti-Israel sentiments on campus. We’re grateful to MTF for empowering us to make the case for Israel on campus more effectively than ever.

Tell us about your post-grad plans, what your options were, and why you chose to do what you’re doing.

I plan to eventually go to medical school in the US but I will be serving in the IDF for the next 2.5 years. Israel is a huge part of my Jewish identity and when so much of the world is against Israel, it is so important for me to serve my country and do my part in protecting it from its enemies. It is not fair for me to just benefit from the existence of Israel from abroad while others ensure its continued existence. It is my job to do so as well.