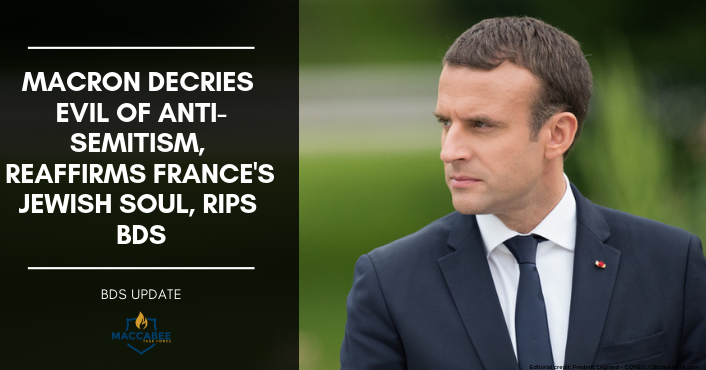 Written by The Jewish Star

French President Emmanuel Macron, addressing an assembly of French Jewish leaders on Wednesday, condemned the plague of anti-Semitism sweeping Europe: “There is something worse than an evil soul. It is a soul that has become accustomed to evil,” he said. “We will not get accustomed to it. … We have to stand against the evil. We need to be courageous.”

“Anti-Semitism is not a problem for Jews, it is a problem for the Republic. And those who think that anti-Semittism concerns only some … should not forget our common history. Anti-Semitism is just hatred for the other. [This is an] avant garde hatred which takes along all the other hatreds” — of “Muslims, races, anti-LGBT, against … the parliament, the churches, all the religions.”

Macron continued: “For centuries and centuries great Jews, commentators of the sacred texts, have lived in France [and are] known all over the world.” He listed many names, and spoke about the Jewish part of the French soul: “Look at our history — all of it. Jews came from all over the world to our country and fought for it and turned it into a universal culture.”

He also said that BDS would not be accepted.