December 12, 2018 Students for justice in Palestine 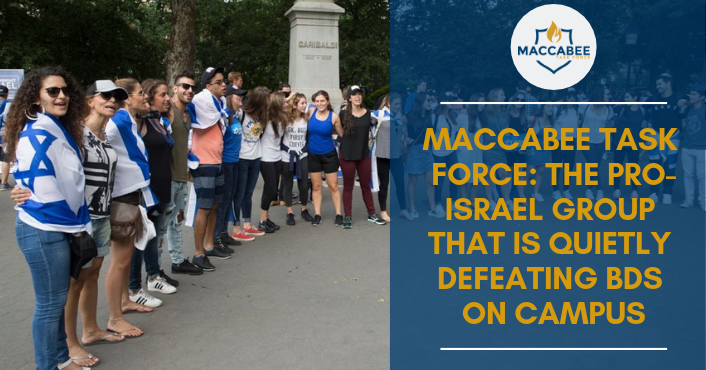 Pro-Israel groups throughout the United States have worked to fight the boycott, divestment and sanctions (BDS) movement on college campuses. But there’s one organization that has become a major player in the fight against BDS that you might not have heard of: the Maccabee Task Force (MTF).

Founded in 2015, as a venture of billionaire businessman and Zionist activist Sheldon Adelson and Dr. Miriam Adelson, MTF identifies college campuses with anti-Israel and anti-Semitic cultures and works directly with student organizations on campus to identify the best solutions for that particular campus rather than a one-size-fits all approach.

“We decided eventually to cut out the middleman and go directly to campus, to sit with the stakeholders, the people who I think know this challenge best, the pro-Israel student activists on those campuses, and then [a] professional on the campus who’s focused down on the campus, rather than having some loyalty to an outside group that might shift their focus,” David Brog, executive director of MTF, told the Journal in a phone interview. “So we just went to each of these campuses and sat with the stakeholders and started asking them, ‘Hey, it’s your campus. You understand it better than we do. You’re more closely connected to it than we are. What do you think would work here? What do you think would help us promote Israel on campus?’”

MTF began on six campuses in the 2015-16 school year; each of the six campuses they visited were able to come up with ideas that were unique to their own particular campus. MTF then expanded to 20 campuses the following academic year and then to 40 in the 2017-18 academic year. MTF is now on 80 campuses, including five Canadian campuses.

The ideas that comes out of MTF’s work with students and activists varies from campus to campus, but any action plan that arises must meet the following goals: a trip to Israel for student leaders, expanding the size of pro-Israel base on campus, taking back the quad – meaning that pro-Israel students take back the campus quad from the anti-Israel groups – and coalition building with other organizations.

Accomplishing these goals typically results in at least 20 large and small events on each campus.

“It enables us to really shift the climate and the culture on campus,” Brog said. “I think a lot of the efforts to date have been very limited. Local groups will bring a speaker to campus to give a speech, maybe they’ll bring a film to campus… speakers here and there, a film here and there, it doesn’t transform a campus. It’s too little. It’s too limited.”

What differentiates MTF’s Fact Finders trips to Israel from trips like Birthright’s, which focus on connecting young Jews with their identity and culture in Israel, is that MTF’s Israel trip delves deep into the Israel-Palestinian conflict, including visits to Judea and Samaria and the Palestinian Authority.

“The entire itinerary of the trip is meeting with different thought leaders, government leaders, security leaders, [and] religious leaders to hear about what’s going on in the conflict and how it affects people on the ground and you know what the political situations are,” Amir Kashfi, former president of Bruins for Israel Public Affairs Committee, told the Journal in a phone interview.

Kashfi also said that most students who attend the trip arrive as staunch BDS supporters; when the trip is over, they become “very conflicted, very torn between different viewpoints.”

“That’s the point: it’s to do an honest and fair job of showing all the different facets of this problem and empowering people to ask their own questions and come to their own conclusions,” Kashfi said.

Elan Karoll, a University of Illinois at Champaign-Urbana student who served as the co-president of the pro-Israel group Illini Public Affairs Committee and was the 2018 StandWithUs campus activist of the year, had a similar experience on the Fact Finders trip. He was among the handful of Jewish leaders on the trip to help facilitate dialogue with the 30 non-Jewish student attendees, several of whom were members of their campus’ student government.

“A majority of them came away significantly more pro-Israel and came back to campus and they were able to help us defeat [a] BDS [resolution], which was so valuable,” Karoll told the Journal in a phone interview.

Kashfi called the Fact Finders trip is “one of the greatest success stories of Israel activism on campus and not just to UCLA but in the United States.” Karoll said that watching the attendees be exposed to Israel and the full nuance of the Israel-Palestinian conflict was “almost like rediscovering Israel.”

Brog said that the trip is effective in changing minds because “there’s a big, big difference between the Israel that is described on these hostile campuses and the reality of Israel.”

MTF also works with students to offer follow-up events after the Israel trips to help build the coalition, such as bringing speakers to campus.

Kashfi said that MTF’s ability to “empower us to learn from our own successes and failures and to grow through trial and error and to see what works for our students on campus” to pro-Israel students launching the “Choose Love” campaign on Valentine’s Day to respond to Students for Justice in Palestine’s (SJP) Israel Apartheid Week.

“Every year the anti Israel folks bring out a big wall and they protest Israel and they paint Israel in a very bad light and create a really hostile campus climate,” Kashfi said, “and the way we respond is we have a ‘Choose Love’ booth where we set up a table a little farther up campus and we blast some Israeli music and we hand out T-shirts that people can paint and we have a little plastic piece that people use to paint the word love in three languages.”

At New York University (NYU), MTF has helped pro-Israel students put on an annual Yom Ha’atzmaut rave at Washington Square Park for the past three years to counteract BDS.

Adela Cojab, president of NYU’s Realize Israel, told the Journal in a phone interview that the rave gets “bigger and better” each year.

“If you can imagine 2,000 students in the middle of the park with Israeli flags singing, Jewish, non-Jewish, passerbys, people who plan to come,” Cojab said. “People will literally block out their day to come to the rave, and that’s only possible because of the Maccabee Task Force.”

The pro-BDS climate on NYU’s campus has become “exponentially aggressive,” according to Cojab, pointing out that two Jewish Voice for Peace and Students for Justice in Palestine students were arrested for disrupting their rave in April. Cojab added that MTF helped NYU students prepare for the rising tide of BDS by aiding them in quickly putting together pro-Israel demonstrations and flying out an anti-BDS professor from Emory University.

“That’s what makes me even more grateful to know that we have resources like Maccabee that are with us throughout it all,” Cojab said. “We’re not their first campus… it’s almost like a sense of comfort that you’re not alone through this, and if you can think of a wild idea to fight BDS, that wild idea can be implemented.”

Such ideas are also spread at MTF’s annual conference, Maccabee Academy, where students learn from each other the best ways to fight against BDS on campus. Cojab said that the conference connects students based on the similarities of the challenges they face on campus rather than geographical location.

“NYU might be in the same geographic area as, let’s say, Hunter College, but we’re more similar to UCLA in the type of student[s] and the type of activism that we seek,” Cojab said, “so they’ll connect us with those groups, they’ll connect us with the presidents of those clubs… that are in similar situations so we can brainstorm ideas off each other.”

Students who attend are also able to obtain some “advocacy skills” as well, according to Karoll.

Brog said that MTF doesn’t necessarily put their name on the ideas that come out of these campuses and says the credit belongs to the students. MTF is there to provide resources, such as funding.

Brog told the Journal that MTF has been able to expand to the point where they’re not only on campuses that have the worst BDS presence, but to campuses that “produce an outsized percentage of tomorrow’s leaders and influencers.”

“Even if they don’t have an active SJP there, there’s still campuses where liberal media is largely dominant, where liberal academia is largely dominant, where students are getting an anti-Israel message in the absence of anti-Israel groups,” Brog said. “So we need to be there putting forth the truth about Israel and it’s critical, because so many leaders are coming from those campuses.”

“I think we need to take the fight to hostile territory,” Brog said.

Additionally, during the 2017-18 school year, Israel Apartheid Weeks were expected to be held on 33 of the 41 campuses that MTF was involved in; only 20 campuses held the event.