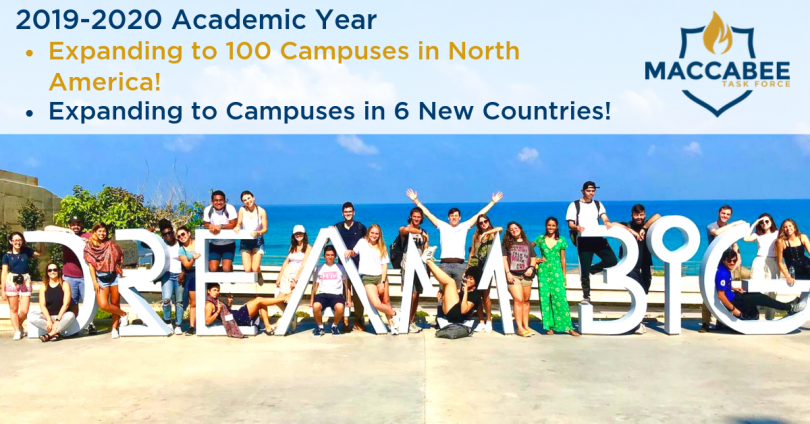 The 2018-2019 academic year was an extremely successful one for the Maccabee Task Force.  We expanded to 80 campuses, supported over 1,200 pro-Israel events, and brought over 1,500 campus leaders and influencers to Israel.  Despite their most aggressive efforts, BDS supporters were able to prevail on only one of our 80 campuses.

But as pleased as we were, we were painfully aware of the many additional campuses that still needed our support.  We received desperate calls and emotional e-mails from across the country and around the world asking for our help in confronting a rising tide of anti-Israel hate.  We pledged to do everything possible to expand to even more campuses in the coming year.

Thanks to the generosity of Sheldon and Miriam Adelson, some other major donors, and many of you,  we’re excited to announce that the Maccabee Task Force is once again expanding.  During the 2019-2020 academic year we will be investing in 100 campuses in the United States and Canada.  And, for the first time, we will be expanding our operations beyond North America to six new countries, primarily in Europe.

We’ve grown our staff to meet these new challenges.  As I write, our teams are already on campuses across the US and abroad meeting with student activists and allies to formulate ambitious strategies for the coming year — including trips to Israel for the most important campus leaders.  Once we finalize these plans, each of our campuses will receive an MTF grant sufficient to support these activities.

We’re excited for the year to come.  We look forward to reporting great progress and continued improvement.  We welcome your ideas, suggestions and criticism as the year unfolds.  And we hope to earn your continued support.