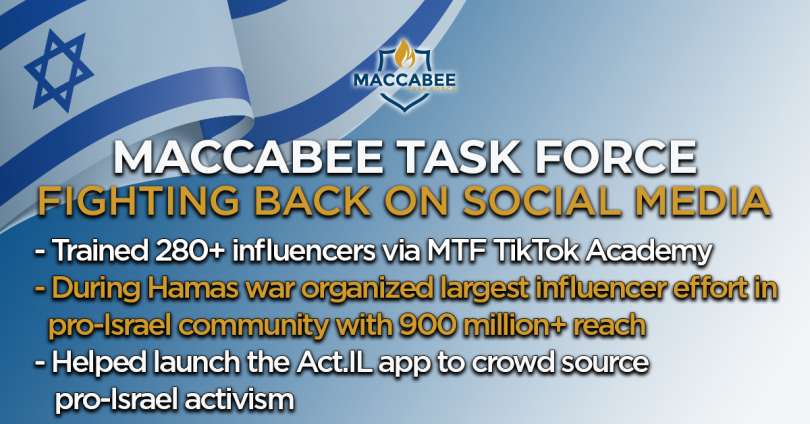 Since our founding in 2015, the Maccabee Task Force has focused on supporting Israel at two levels: grassroots and digital.

We believed then — and still believe — that the most effective pro-Israel work is done through retail activism on the ground.  One relationship at a time.  One coalition at a time.  That’s how you claw back hostile territory on campus.  There’s no alternative to this hard work.

But we’ve always understood that digital media plays a central and growing role in shaping opinions on campus.  Students will walk by the anti-Israel “apartheid wall” and the pro-Israel “peace tent” oblivious to both because they’re looking down at their phones.  We need to be on that campus.  And we need to be on that phone.

As everyone now knows, things on that phone are going from very bad to even worse.  We didn’t just lose to the Israel haters during the recent conflict with Hamas.  We were completely overwhelmed.

But while we’re all now aware of the problem, too few are proposing promising solutions.  Doing better on social media doesn’t mean pumping out more pro-Israel content to pro-Israel people.  That’s far too easy and ineffective.

The real challenge on social media remains what it’s been for the past decade: crowd sourcing content production and distribution to reach multiple outside communities on multiple platforms with narrowly tailored, organic content.

What does that mean?  For starters, it means that we won’t be hiring a pollster to tell us what type of content might appeal to a specific demographic.  And we won’t be paying a PR firm to design such content based on these findings.  Social media offers you immediate feedback in real time every second of every day.  Just look at the numbers.

Instead, we work directly with the influencers who’ve proven their expertise through their success.  We’re empowering these influencers to produce and distribute relevant content.  We’re supplementing their ranks by training activists to grow their followings.  And we’re knitting them all together into a community that can support and educate one another.

Among our highlights to date we’ve:

Are these initiatives sufficient?  Absolutely not.  In the coming months we’ll be accelerating these efforts.  In addition, we’ll be launching a new project to address the structural issues that keep our content from reaching more people.  Simply put, we’re so greatly outnumbered on social media that the algorithms highlight anti-Israel content while largely ignoring our own.  There are ways to shift this numerical disparity that are legal, moral and quite compelling.

We learned long ago that we can be much more effective if we don’t plaster our name on all we do.  This is especially true when it comes to social media.  Don’t expect to see our logo attached to these efforts.  We don’t need the credit.  But we sure could use some help.  If you’re interested in learning more and helping us reach even larger numbers, please let us know.