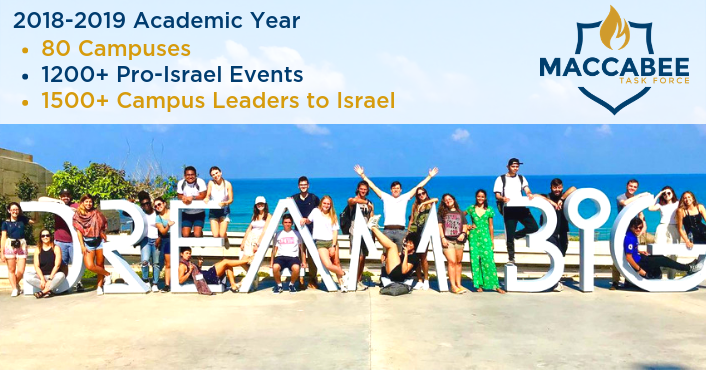 When the 2018-19 academic year came to an end, we sent questionnaires to our partners on our 80 North American campuses and held a series of extensive follow up conversations.  Their feedback is in, and I wanted to share some encouraging statistics and results with you.

Campus Activism:  Through the action plans we funded on our 80 campuses we generated a total of 1,244 pro-Israel events over the course of the academic year.  Each of these events served a critical strategic goal.  Some recruited and trained more pro-Israel activists.  Others supported coalition building outreach to powerful campus groups.  And others were public demonstrations of support for Israel aimed at “taking back the quad” from the Israel haters.

Israel Trips:  Nothing is more effective in changing attitudes towards Israel than a visit to Israel.  During the 2018-19 academic year we brought a total of 1,519 campus leaders to Israel on 74 separate trips.  Each of these leaders was identified as someone who could play a critical role in shaping the debate about Israel on campus.  Even the most skeptical among them returned from Israel opposed to the BDS movement’s simplistic scapegoating of Israel.  And many of these leaders acted on what they learned by working to oppose BDS at critical junctures upon their return.

Results:  The results of these efforts surpassed even our most optimistic predictions.  On campus after campus we saw BDS resolutions withdrawn or defeated.  In the end, BDS passed on only 1 of our 80 campuses (and we chose the most challenging campuses).  In almost every case where we defeated BDS, our partners told us that it was our action plan that enabled the victory.

This margin of victory — 79 to 1 — should encourage every single one of us.  We’re not being overwhelmed.  We’re not on the run.  When we equip our pro-Israel students with the right strategies and sufficient resources, they are winning far more often than they lose.

We mustn’t despair.  But we mustn’t ease up — not for a minute.  We have to assume that some of the “quiet” we enjoyed on many of these campuses is illusory.  In some cases, anti-Israel students have simply abandoned BDS in favor of other strategies.  Many are intensely focused on participating in the progressive coalitions that are protesting President Trump and his policies.  These anti-Israel activists will almost certainly present a bill for services rendered to their coalition partners.  And this bill will seek payment in terms of support for BDS and other Israel-bashing strategies.

Rather than ease up, we need to double down on building our own coalitions and networks of support.  This is exactly what we intend to do.  And we’re determined to bring our transformative strategy to even more campuses and communities facing anti-Israel hostility.  We hope you’ll consider investing in our growth.  With sufficient support, we’ll be able to announce an exciting expansion very soon.