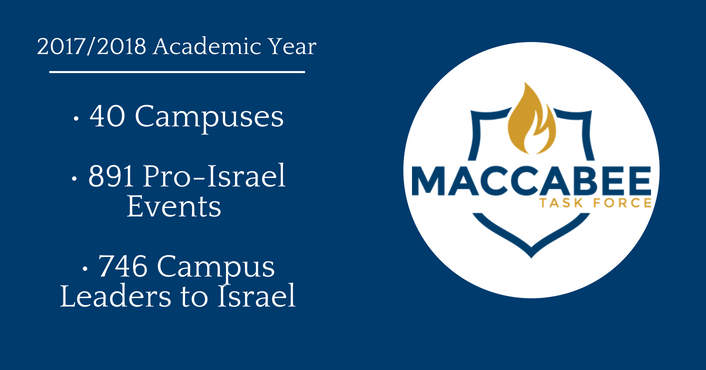 As the 2017-2018 academic year comes to a close, we wanted to update you on our activities and accomplishments.

This year we brought our updated strategy to 40 American campuses facing the most aggressive anti-Israel efforts.  In each case we worked with the top pro-Israel activists on campus to tailor our plans to their specific needs.  The “action plans” we generated together — plans which we funded and the students executed — were not simply a few one-off events.  These were comprehensive strategies typically in excess of 20 events/initiatives that transformed the campus conversation about Israel.

Through these action plans we held a total of 891 pro-Israel events this year.  Each of these events served a critical strategic goal.  Some recruited and trained more pro-Israel activists.  Others supported coalition building outreach to powerful campus groups.  And others were public demonstrations of support for Israel aimed at “taking back the quad” from the Israel haters.

In addition, we brought a total of 746 campus leaders to Israel on 34 separate trips.  Each of these leaders was identified as someone who could play a critical role in shaping the debate about Israel on campus.  Even the most skeptical among them returned from Israel opposed to the BDS movement’s simplistic scapegoating of Israel.  And many of these leaders acted on what they learned by working to oppose BDS at critical junctures upon their return.

The results of these efforts surpassed our expectations.  On campus after campus we saw BDS resolutions withdrawn or defeated — eventually BDS passed on only 3 of our 40 campuses (and we chose only the most challenging campuses).  In almost every case where we defeated BDS, our partners told us that it was our action plan that enabled the victory.  Across the country we saw our pro-Israel students step forward with greater knowledge and heightened pride to share their love of Israel.  They were not afraid.

But while we had a great year, it was not a perfect year.  Some of our events were poorly executed.  Others were simply ineffective.  And while we won far more battles than we lost, BDS still passed on three of our campuses.  Rest assured, we’re committed to recognizing, analyzing and learning from each and every mistake along the way.  As a result, we’ll have even better strategies and best practices to offer our partners in the future.

We’re determined to bring our transformative strategy to even more campuses facing anti-Israel hostility.  We hope you’ll consider investing in our growth.  With your support, we look forward to announcing an exciting expansion in the fall.