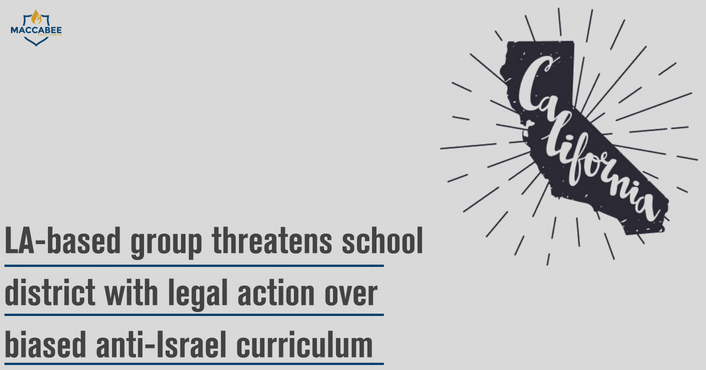 LAUSD is the second-largest school public school system in the US and the largest in the state of California, enrolling more than 640,000 students at over 900 schools and 187 public charter schools.

Ahead of the event, The Israel Group (TIG), described on its website as “a nonprofit that protects Israel in the diaspora by identifying, developing, and launching initiatives to cripple the boycott (BDS) movement against Israel,” protested to LAUDS that it had recruited “an anti-Israel, pro-BDS, pro-Palestinian organization – The Fellowship of Reconciliation (FORUSA)” for a professional development initiative.

One workshop session, for example, was titled “The Creation of Palestinian Refugees and Ethnic Cleansing.”

Under the heading “The June 1967 War,” the workshop’s literature states that “from 1948 to 1967, Israel’s military and political leadership was looking for a way to conquer and occupy the West Bank and Gaza Strip.”

According to TIG, the word “terrorism” was rarely used, including once with the PLO “renouncing” it and in another instance with a quote by one of the presenters calling Israeli military “occupation” the “highest form of terrorism.”

Jack Saltzberg, TIG’s president, sent a letter to LAUSD at the time, demanding, among other things, that both sides of the Israeli-Arab conflict be represented “rather than only using anti-Israel and pro-Palestinian activists and organizations.”

In response, Jefferson Crain, LAUSD executive director, described “Learning About Islam and the Arab World” as “promoting multicultural awareness as well as respect for diversity, dialogue, and non-violent conflict resolution.”

“It is important to note evaluations received by Human Resources indicate the course received satisfactory ratings by participants,” Crain added.

The program’s five-year term ended recently, however, according to LAUSD, FORUSA has submitted a proposal to renew the cycle.

On July 18, Saltzberg sent a letter to Austin Beutner, LAUSD’s new Superintendent, informing him of what had transpired. According to Saltzberg, as expressed in his correspondence to Beutner, the LAUSD workshop “constituted a one-sided official condemnation of core Jewish religious beliefs and right of self-determination.”

He also pointed out that one day of the two-day workshop was a Saturday – the Jewish Sabbath – making it impossible for religiously observant Jews to attend. “This scheduling decision further limited the Jewish perspective and abiity to counter the propaganda and factually inaccurate statement about Israel at the workshop,” he wrote.

“It should also be noted that The Israel Group learned that FORUSA and several presenters and educational content providers at the workshop are highly involved with the Boycott, Divestment and Sanctions (BDS) movement against Israel” and that it is against the law in California for any government agency or for companies doing business with California government agencies to participate in such a boycott.

Saltzberg reminded Beutner that “pursuant to Section 2010 of the California Public Contract Code (PCC 2010), any state contract with a value of $100,000 or more requires a written certification that the contracting party does not have a discriminatory policy against a sovereign nation of people, such as Israel.”