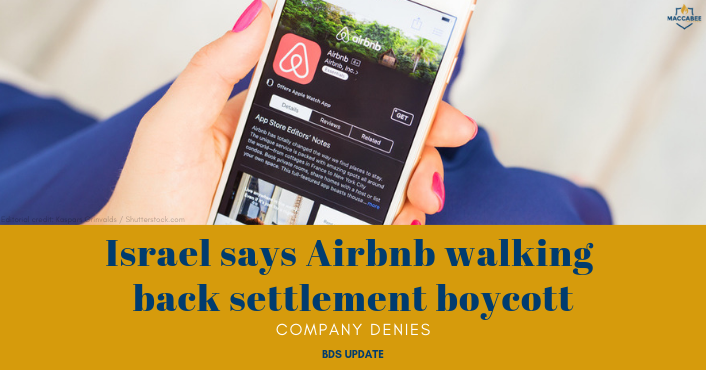 Vacation rental site asserts it rejects BDS and is committed to developing business inside Israel, says it is still developing tools to implement policy

Airbnb on Monday rejected an Israeli government assertion that it had agreed to walk back its decision to remove listings from Israeli settlements in the West Bank.

“The reports issued earlier today are inaccurate,” the company said in a statement issued by its press secretary, Nick Papas.

The apparent denial came shortly after the Tourism Ministry issued a statement of its own, saying Airbnb had told officials that it would not be implementing its policy — a move it called “a step in the right direction.”

A spokeswoman for the Tourism Ministry said that the statement had been in response to one that she had received from Yuval Lidor, a representative of Airbnb in Israel.

But while Lidor had indeed issued a statement saying that the settlement boycott “would not be implemented in practice,” he later appeared to walk back that announcement, asking The Times of Israel to refer exclusively to the English press release from Papas — one that appeared to deny that Airbnb had changed its mind.

“Airbnb expressed its unequivocal rejection of the BDS movement and communicated its commitment to develop its business in Israel, enabling more tourists from around the world to enjoy the wonders of the country and its people,” the official Airbnb statement from Papas said.

“We are here to meet with a variety of stakeholders and as a result of our meetings have an even deeper understanding that this is an incredibly complex and emotional issue,” the statement continued, referring to discussions held in recent days in Israel between the Tourism Ministry and an Airbnb delegation led by its global policy and public affairs head, Chris Lehane.

“Airbnb communicated that we are developing the tools needed to implement our policy and that process includes continuing our dialogue with the Government of Israel and other stakeholders,” the company’s statement concluded, suggesting that it has yet to establish a mechanism for its site to differentiate between Israeli and Palestinian listings in the West Bank.

Papas later said that Lidor’s statement on behalf of the company had been “sent in error.”

While Airbnb’s initial November 19 statement announcing the removal of some 200 settlement listings was still up on its site as of Monday evening, so were Israeli offerings beyond the Green Line. An Airbnb spokesman had initially said it would be implementing its decision “in the coming days.”

The vacation rental site’s decision last month infuriated members of Israel’s right-wing government along with settler leaders throughout the West Bank and Jewish organizations in the United States. Levin and Strategic Affairs Minister Gilad Erdan lambasted the move as “racist” and “anti-Semitic,” arguing that it applied a different standard to the Jewish state than to other disputed territories around the world.

Responding to the criticism of the decision, Airbnb said that it had come after “considerable time” was spent consulting experts on the Israeli-Palestinian conflict. Airbnb said that, as an industry leader, it “must consider the impact we have and act responsibly.”