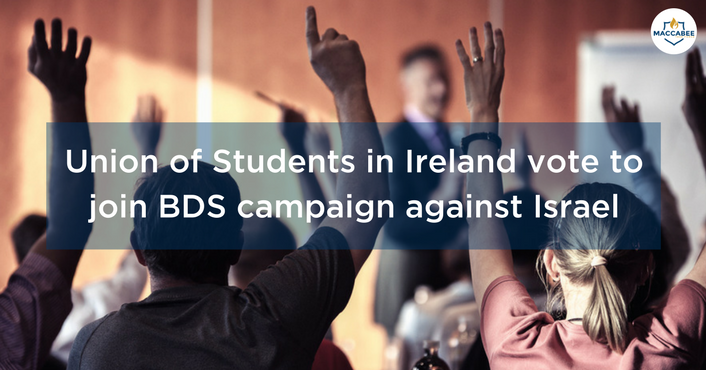 The Union of Students in Ireland voted last Thursday to join the boycott, divestment, and sanctions BDS campaign against Israel, shortly after the country’s largest teachers’ union expressed support for the movement.

The student body — which represents 374,000 members in universities in Ireland and Northern Ireland — passed the motion at its annual congress in Galway, with some 250 students voting.

The measure called on USI to support an academic boycott of Israeli higher education institutions, mark Palestine Solidarity Day, and teach its members about “the background to the situation in Israel/Palestine.”

It also urged the termination of university contracts with, and divestment of funds from, companies accused of complicity in “the occupation of the Palestinian territories and violation of Palestinian human rights more widely.”

“The students of Ireland have today made the historic decision to support the people of Palestine,” USI President Michael Kerrigan said.

A day earlier, the Irish National Teachers’ Organisation (INTO) unanimously passed a resolution at its own annual congress, which noted “with concern the reported human rights abuses perpetrated on a daily basis against Palestinian school children.”

The motion — the only one of its kind focused on international affairs — committed the INTO to “fully support and promote” the “position on Palestine” advocated by the Irish Congress of Trade Unions, which has explicitly backed BDS. It also called for the group to “explore ways to further develop solidarity with Palestinian schools, teachers and trade unions.”

Late last month, Trinity College Dublin’s Students’ Union voted to adopt a long-term policy endorsing the BDS campaign. At the time, a student at the school who opposed the motion shared pictures of anti-Jewish and anti-Israeli graffiti he found on campus, some of which included Holocaust denial and targeted an Israeli professor by name.

“Pro-Palestine sentiment is extremely common among the Socialist far-left in Ireland,” the student told The Algemeiner. “These movements see a resemblance between an occupation of Ireland under Britain with what they perceive as an occupation of Palestine by an [alien government].”

In January, the Irish Senate postponed voting on a bill that seeks to criminalize trade with Israeli settlements, following opposition from Israeli Prime Minister Benjamin Netanyahu. Israel said it considered the legislation a BDS initiative, which Ireland’s ambassador to Israel denied.