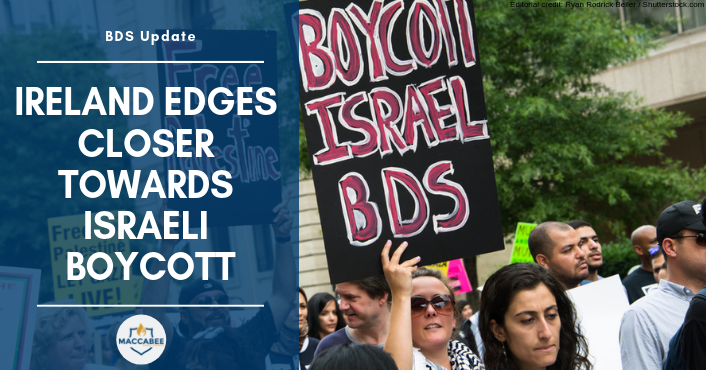 Irish Senate approves another stage of bill intended to outlaw imports of goods produced in ‘illegal settlements in occupied territories’; Legislation, initially introduced by Irish senator with ties to Palestinian terror groups, was labeled by Minister Erdan as a ‘disgrace.’

The Irish Senate partially approved Wednesday a bill meant to outlaw the import of goods from Jewish settlements in the West Bank and east Jerusalem, as well as cities and towns in the Golan Heights.

Thirty Senate members voted in favor of the Control of Economic Activities (Occupied Territories) Bill—the first stage of which was approved in July—with 13 members opposing the legislation.

According to the proposal, any imports from “illegal settlements in occupied territories” would lead not only to a fine of up to €250,000, but a five year prison term as well.

For the legislation to be ratified, it requires another approval by the Senate, the Lower house of the Irish parliament, and by the Irish president.

The bill, meant to sever all commercial ties between Ireland and east Jerusalem, Area C of the West Bank and the Golan Heights, was introduced to the Senate last February by Irish Senator Frances Black of the Sinn Féin party.

Senator Black recently led an anti-Israeli campaign in cooperation with Al-Haq—a Palestinian human-rights organization based in Ramallah with deeply-rooted connections to the terror group the Popular Front for the Liberation of Palestine (PFLP)—in addition to her support of the Boycott, Divestment and Sanctions (BDS) movement in the country.

In the past, Black referred to Israeli settlements as “war crimes” and compared her initiative in the Senate to Irish legislations aimed against the apartheid in South Africa.

“Ireland should defend justice and human rights on a regular basis,” said Black to the applause of almost the entire Parliament, with the exception of the center-right party Fine-Gael.

The Irish government strongly opposes the initiative and claims it creates trade restrictions contrary to EU values, as well as undermines Ireland’s influence in the region.

According to EU law, its members can only mark products coming from settlements, but not boycott or impose sanctions on their import.

In addition, the decision could carry serious consequences for Ireland due to the fact that many companies from the United States—where anti-BDS laws recently passed in 26 states—are operating in the country.

There are several prominent boycott organizations operating in Ireland with strong anti-Semitic rhetoric and worrying connections to Palestinian terrorist organizations. For instance, the Ireland Palestine Solidarity Campaign (IPSC)—that raises “public awareness about the human rights abuses in the occupied territories”—is responsible for the cancellation multiple Israel-organized events in the country.