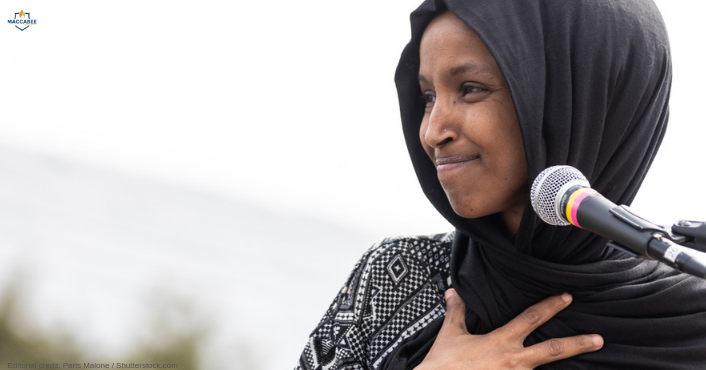 The resolution aims to affirm ‘the right to participate in boycotts in pursuit of civil and human rights at home and abroad’ and was co-sponsored by Reps. Rashida Tlaib and John Lewis.

US Rep. Ilhan Omar (D-Minnesota) put forth a new ‘pro-boycott’ resolution in Congress “affirming that all Americans have the right to participate in boycotts in pursuit of civil and human rights at home and abroad, as protected by the First Amendment to the Constitution.”

While the resolution does not mention the acronym BDS, it seems clear that this was a response to an anti-BDS resolution.

The freshman congresswomen has become a focal point of anti-Israel and antisemitic sentiment, following numerous controversial comments regarding Israel.

Omar’s resolution revealed on Wednesday, cosponsored by Rep. Rashida Tlaib (D-Michigan) and Rep. John Lewis (D-Georgia), seeks to oppose “unconstitutional legislative efforts to limit the use of boycotts to further civil rights at home and abroad,” and “urges Congress, States, and civil rights leaders from all communities to endeavor to preserve the freedom of advocacy for all by opposing anti-boycott resolutions and legislation.”

Rep. Brad Sherman (D-California) told The Jerusalem Post that Omar’s resolution should not be taken seriously.

“I can’t imagine that any committee is going to mark up or take seriously any pro-BDS resolution,” Sherman said. “Am I worried about the overall BDS movement worldwide as an economic matter? No. As an effort to delegitimize Israel, of course. The comments here today are a tiny part of that delegitimizing effort.”

Rep. Lee Zeldin (R-New York), who spoke right after Omar, said “the BDS movement has not distant itself from Hamas,” and that “Hamas uses women and children as human shield.” He described in detail the terrorist threats from Hezbollah and other organizations, and stressed the need to stand by Israel.

“Let’s not deny our duty to be honest brokers,” he continued. “To oppose resolution 246 and to say that everything is due to the Israeli occupation? Why not mention that in 2008, Israel had offered to withdraw from 93% of Judea and Samaria? Or what about our students in colleges from coast to coast, being attacked with blunt antisemitism in the name of BDS?

“Don’t come to this committee and to this Congress and start blaming Israel for all of the violence that it happening to it. That is not honest to accuse Israel to everything that it is suffering from.”

Omar’s action was in response to the House Foreign Affairs Committee moving forward with five pro-Israel bills, three of which are resolutions with declarative purpose, and two others bills that seek to sanction supporters of Hamas and to make improvements to the defense and security assistance to Israel.