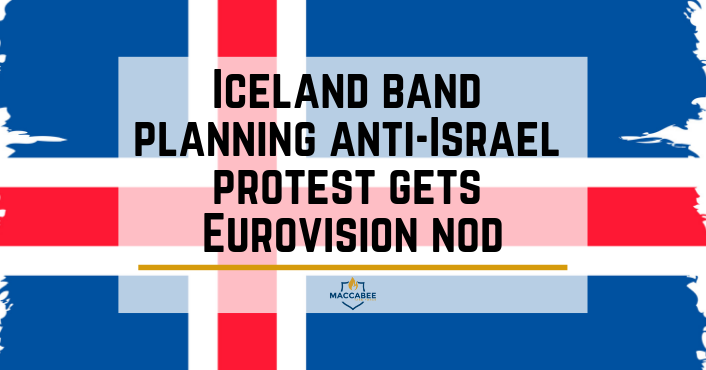 BDSM-themed band Hatari says it wants to promote Palestinian cause onstage despite contest’s ban on political activity; has also challenged Netanyahu to bout of ‘trouser wrestling’

Iceland on Saturday made its pick to represent the country at the upcoming Eurovision song contest, choosing a band that has threatened an onstage protest against Israel’s treatment of the Palestinians and has issued a challenge to Prime Minister Benjamin Netanyahu for a bout of Scandinavian combat known as trouser wrestling.

The group won the local selection contest with its song “Hatrid Mun Sigra,” Icelandic for “Hatred will prevail” and will now go on to compete in the semifinals scheduled for May 16, in Israel.

In a February interview with Iceland’s biweekly Stundin newspaper, band members spoke of their strong identity with the Palestinian cause, saying they felt it was their duty to use the Eurovision contest as a platform to broadcast their views.

Under the terms of the contest, participants are prohibited from making political statements at the event.

Hatari criticized its home country for not boycotting the contest because it is being hosted by Israel, a country it said violates human rights.

The band said it would nonetheless participate in order to take its message to as many people as possible in Europe.

Asked about the ban on political activity and the possibility that they would be disqualified if they plan a stage protest, members retorted that they see Eurovision as a political contest and even more so now it is being held in Israel.

“Perhaps we will be driven out of the contest, but it would be just as revealing as any act that we can think of onstage,” band members told Stundin.