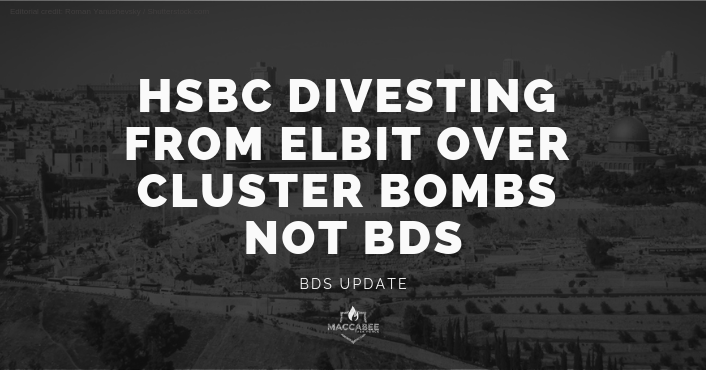 The Palestinian Solidarity Campaign (PSC) is engaging in Fake News, as U.S. President Trump would call it, with a happy press release crowing about the recent divestiture by HSBC bank from Israeli defense contractor Elbit Systems over its military production of weaponry for the IDF. The fact is, it’s a bunch of lies, with a bare grain of truth.

There was a decision by HSBC Bank to divest from Elbit Systems, but it was allegedly linked to the bank’s unwillingness to invest in cluster bombs, and had nothing to do with the Boycott, Divest and Sanctions (BDS) campaign against Israel, according to bank executive Stuart Levey.

Levey, who is the HSBC chief legal officer and group managing director, wrote a detailed explanation to The Jerusalem Post, saying, “HSBC’s decision to divest from Elbit Systems was not the result of campaigning by the Boycott, Divestment and Sanctions movement, and it is not indicative of support for the movement’s objectives.

“Following a recent acquisition by Elbit Systems, our investment in the company is no longer consistent with our defense policy with respect to cluster munitions, and Elbit Systems joins a number of other companies, including some major U.S. defense contractors, that are impacted by this policy… “HSBC has a banking operation in Tel Aviv and provides banking services to numerous Israeli companies. We have every intention of continuing to do so,” Levey added.

IMI Systems, formerly Israel Military Industries, was acquired by Elbit one month ago. The company has produced cluster bombs in the past. But Elbit denies have receiving any notification from HSBC informing the defense contract of the decision. “We have not gotten any note in this regard from HSBC, so I have to refer you to HSBC to see if there is any factual basis to the report you mention,” Elbit Vice President David Vaknin wrote to JewishPress.com in an email. Vaknin subsequently added in a statement to The Jerusalem Post this week, ““As part of the Elbit Systems organization, IMI Systems will not be continuing its prior activities with respect to cluster munitions.”