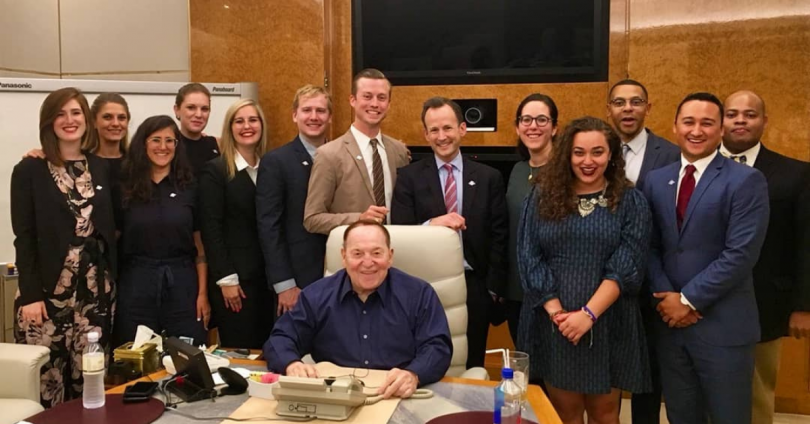 Sheldon Adelson was a giant. He was a fighter who dedicated himself to defending Israel and the Jewish people. But he was as generous and kind as he was tough.  He gave freely of his money and his time without any desire for credit.

His mission was a personal one. Having experienced anti-Semitism as a child, he refused to accept that young Jews were still suffering the same hate today.  He dedicated himself to building up an organization that would defend them and the Jewish state.

The Maccabee Task Force is honored to carry on the banner of his vision and deep commitment to supporting Israel and to the Jewish people.

Mr. Adelson’s passing is a tremendous loss for the Maccabee Task Force, the Jewish people, Israel, and the United States. We are grateful beyond words. Mr. Adelson, we will miss you dearly.

We extend our love and condolences to his wife, the woman who co-authored his impactful vision, Dr. Miriam Adelson. She wrote most eloquently of this loss, and of the man who was Sheldon Adelson:

“He was an American patriot: a U.S. Army veteran who gave generously to wounded warriors and, wherever he could, looked to the advancement of these great United States. He was the proudest of Jews, who saw in the State of Israel not only the realization of an historical promise to a unique and deserving people, but also a gift from the Almighty to all of humanity.

For Sheldon, recognition of his own indispensable role was unimportant. What counted was that good be done. He cared about standing up for what was right, even if that meant standing alone. His ideal day’s end was in the company of family and friends, not statesmen or celebrities.

Sheldon and I grew up on coasts: him in Boston, me in Haifa. Together we sailed across oceans, pushed back the Pearl River Delta to help develop Macao’s future, recreated the Venice lagoon canals in Las Vegas. To me, Sheldon had power and depth and mystery like the sea. His devotion lifted me, like waves, through challenges both personal and professional.

And now he is gone. The supporting waters have vanished heavenward. Only a vast, dry seabed remains. The loss is colossal.”

Read Dr. Adelson’s full statement as linked in this article from the Las Vegas Review Journal.