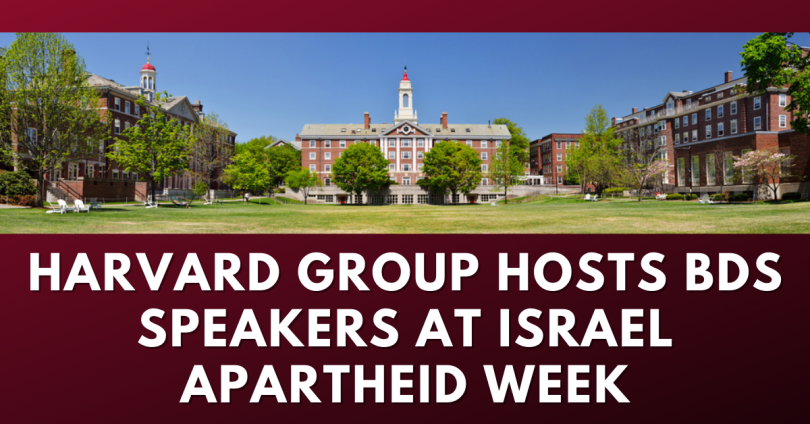 The Harvard College Palestine Solidarity Committee ended its annual Israeli Apartheid Week, which included a roster of anti-Israel and anti-Semitic speakers and programs.

Programs, held from April 26-30 virtually this year, included webinars titled “Healthcare Injustices in Palestine and the COVID-19 Pandemic,” and “Divestment as a Historical Tool for Justice,” which was a discussion with tenured Harvard Professor Cornel West, a supporter of BDS, and BDS movement co-founder Omar Barghouti.

Featured panelists included Swarthmore College associate professor and BDS advocate Sa’ed A. Atshan, and Palestinian feminist scholar and activist Yamila Hussein-Shannan, who has claimed that Palestinian men are “forced to parade naked in the streets” by Israeli soldiers and citizens and blamed the oppression of Palestinian women on Israel’s “occupation.” Another featured panelist was Sumaya Awad, who has expressed support for violent protesters in Israel and promoted hatred against the Jewish state, according to Canary Mission.

A number of student organizations co-sponsored the week’s events, including Harvard Out of Occupied Palestine and Jewish Coalition for Peace, the school’s newspaper The Harvard Crimson reported.

Gilead Ini, a senior research analyst at the Committee for Accuracy in Middle East Reporting and Analysis (CAMERA), told JNS he is not surprised that “such discriminatory, anti-Jewish programming was brought to campus.”

After all, he said, it wasn’t long ago that the same group hosted a program to defend Rasmea Odeh, who murdered two Israelis while working for a terrorist organization dedicated to eliminating Israel. “It is an end goal that’s shared by Apartheid Week, and apparently by the Palestine Solidarity Committee,” said Ini.

He added that “Apartheid Week is an annual ritual of anti-Israel propaganda on college campuses that is meant, ironically enough, to convince students that [South African anti-apartheid leader] Nelson Mandela was wrong. However, Mandela openly recognized ‘the legitimacy of Zionism as a Jewish nationalism,’ and was forceful in supporting Israel’s right to exist.”