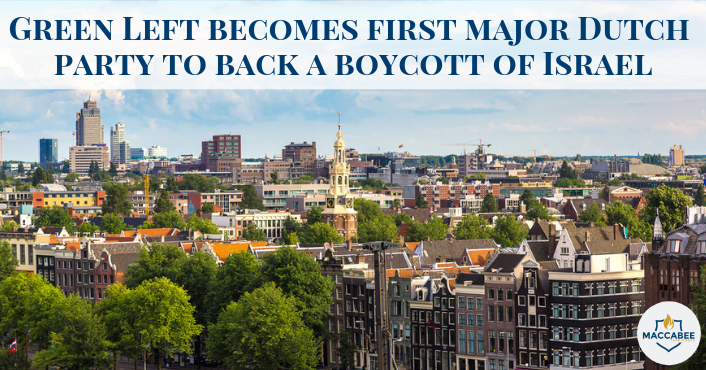 The party voted in favor of a boycott motion during its Feb. 16 General Congress. The Green Left has 14 seats out of 150 in the House of Representatives, the lower house of the parliament.

“BDS is a legitimate means to help Palestinians in their fight for justice,” the motion says. It also says that the Green Left “will be alert and resist forcefully attempts in any country to criminalize BDS,” the Boycott, Sanctions and Divestment movement against Israel.

While practicing a boycott of Israeli goods or products is legal in Europe and in other countries around the world, promoting such boycotts is a violation of anti-discrimination laws in France and Spain, courts in those countries have ruled.

The Dutch Center for Information and Documentation on Israel, a Jewish group that is committed to fighting anti-Semitism and Israel advocacy, condemned the resolution.

“Green Left conveniently ignored how, in practice, BDS goes hand in hand with expressions of anti-Semitism and is linked to terrorist groups,” CIDI wrote.

The Likoed Nederland pro-Israel group wrote in a statement that Green Left “has declared itself a racist movement,” noting that the party has passed no other motions on boycotting Morocco, China, Turkey or Russia – all of which are internationally considered occupying powers.