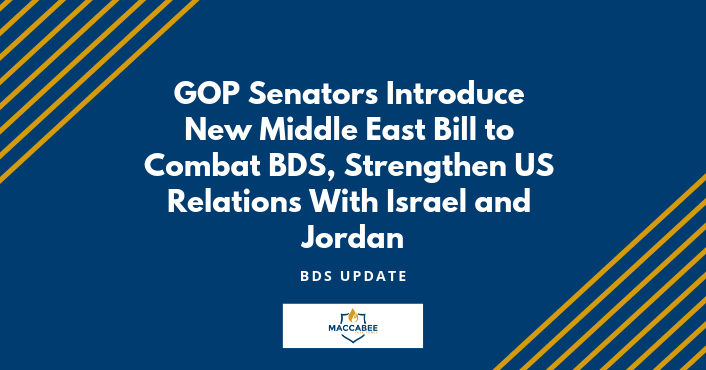 The first Middle East-related legislation of 2019 was presented to the US Congress this week, as four Republican senators introduced a bill to bolster US defense and security measures in the region, as well as combat the anti-Israel BDS movement.

According to a statement from Rubio’s office, the bill” would make improvements to defense and security assistance provisions in the Middle East, bolster the US-Israel strategic alliance by authorizing security assistance to Israel over a 10-year period pursuant to the 2016 Memorandum of Understanding, reauthorize the United States-Jordan Defense Cooperation Act of 2015, provide new authorities for sanctions against Syria’s Assad regime and its supporters, and empower state and local governments in the United States to counter the anti-Israel boycott, divestment and sanctions (BDS) movement’s discriminatory economic warfare against the Jewish state.”

The legislation combines four Middle East-related bipartisan bills that were nearly enacted into law by Congress last year, including the Combating BDS Act of 2018.

Rubio argued that it was “in America’s national security interests to ensure that our allies in the Middle East like Israel and Jordan remain secure amid the region’s growing destabilizing threats posed by Iran and Syria’s Assad regime.”

Risch observed that Israel and Jordan were “steadfast allies of the United States that deserve this support.”

“The Senate Foreign Relations Committee reviewed these bills last Congress and they had near unanimous support,” Risch continued. “It is time to move them forward.”

Former Senator Norm Coleman — now the chairman of the Republican Jewish Coalition (RJC) — praised the four senators “for moving quickly to address this important unfinished business from the previous Congress.”

Coleman said in a statement on Friday: “We hope that the bill will be speedily passed by the full Senate and that the House will follow suit.”