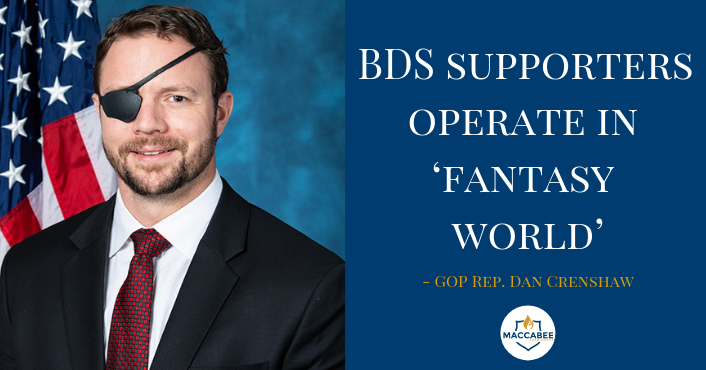 Crenshaw, a former Navy SEAL who was wounded in Afghanistan, says those who are supporting the BDS movement “are operating in a fantasy world where they actually don’t understand what the Middle East is all about.”

He was catapulted into the spotlight by “Saturday Night Live” actor Pete Davidson, who made fun of the patch that Crenshaw wears over his right eye, which was lost after the Navy SEAL was injured by an improvised explosive device in Afghanistan in 2012 during his third of five tours overseas (Davidson offered an apology to Crenshaw, who accepted it and even took some zingers at him, along with conveying a unifying message for the audience).

Along with five then-incoming freshmen members of Congress, Crenshaw participated on a trip to Israel in December organized by the American Israel Public Affairs Committee’s American Israel Education Fund to learn about the U.S.-Israel relationship.

JNS talked with Crenshaw in person. The interview has been edited for brevity and clarity.

Q: What’s your overall stance on the U.S.-Israel relationship since being there in December?

A: I’m supportive. It doesn’t get any simpler than that. We need to support the U.S.-Israel relationship. It’s important for Israel, our allies, but also for the U.S. It’s a mutually beneficial relationship.

A: Conflict in the Middle East never stays contained in the Middle East. The world is a small place, and so U.S. leadership abroad has always been an important part of maintaining the liberal global order that has underwritten by the United States since World War II. With that in mind, we should always be looking for strong allies that share our values. The Jewish state clearly shares our values, so we should support it for moral reasons, and we should support it for strategic reasons.

Q: Having served abroad, were you able to see Israel’s threats firsthand?

A: My deployments in the Middle East gave me an insight into the human element there, gave me a more realistic understanding of what Israelis are dealing within the context of Middle Eastern politics and how different that is from Western civilization. A lot of people who are skeptical of Israel and the United States, who are forming a BDS movement, are operating in a fantasy world where they actually don’t understand what the Middle East is all about.

Being in Israel, you get a much more direct look at what they’re dealing with. You’re in a country whose population is close to that in my county. That’s pretty significant especially when you’re surrounded by your enemies. It’s hard for many Americans to imagine what that might be like; you really have to go there to understand that. You have Hamas fully in control of the Gaza Strip—well-armed, raining down rockets on Israeli civilians indiscriminately. You have Hezbollah to the north—digging tunnels to the Lebanese border, trying to infiltrate Israel for no other purpose than to kill Israelis. You have ISIS in Syria. There’s a long history of Israel’s Arab neighbors attempting to invade and end the Jewish state, so, for good reason, we should be worried about Israel’s security. And Iran, a powerful country that seeks to destroy Israel—and says as much and funds proxies both with Hamas and Hezbollah in order to meet those ends.