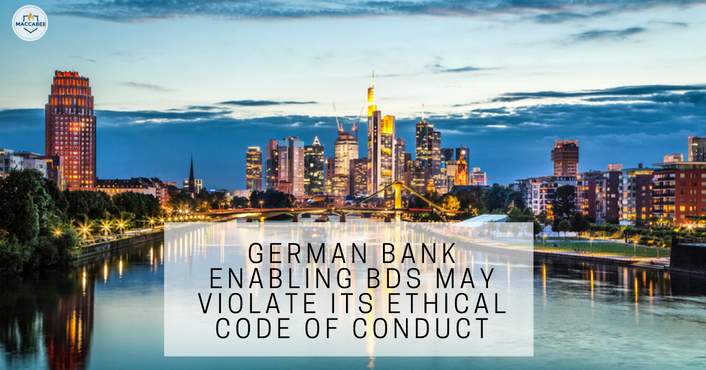 The US-based Jewish Voice for Peace (JVP), which Israel banned in January from entering its territory, hosted the convicted Palestinian terrorist Rasmea Odeh at its spring 2017 conference in Chicago.

The pro-Israel group Action Forum Israel (Aktionsforum Israel) in Germany has released an eye-popping report on its website, questioning whether the Bank for Social Economy violated its internal policies and anti-terror finance laws by providing a bank account to the pro-BDS group Jewish Voice for a Just Peace in the Middle East.

Action Forum Israel, which was founded by Israelis living in Germany and Germans, asked if the “Jewish Voice for a Just Peace fulfills the criteria of the bank as a customer” in light of its connections to its self-described “sister organization” Jewish Voice in the US that supports the convicted Palestinian terrorist Rasmea Odeh.

The US-based Jewish Voice for Peace (JVP), which Israel banned in January from entering its territory, hosted Odeh at its spring 2017 conference in Chicago.

The head of Jewish Voice said at the time that JVP was “honored to hear from her.”

Odeh, a former member of the US- and EU-classified terrorist organization Popular Front for the Liberation of Palestine, was responsible for a 1969 bombing that murdered two students, Leon Kanner and Eddie Joffe, in a Jerusalem supermarket.

She pleaded guilty in 2017 to US naturalization fraud and was deported in September to Jordan because she had lied about her terrorism conviction when she entered the US.

According to the Bank for Social Economy’s code of conduct, the bank values such concepts as “integrity, fairness, honesty, respect, professionalism, competence, responsibility.”

The Action Forum questioned if Jewish Voice’s political advocacy violates the bank’s ban on political work. Jewish Voice has campaigned to convince German politicians and the public to boycott military deals with Israel and against Israel’s embassy for sponsoring a pop culture festival slated for August in Berlin. British and US bands have boycotted the festival due to the BDS pressure campaign from Jewish Voice and other anti-Israel entities.