August 30, 2019 Students for justice in Palestine 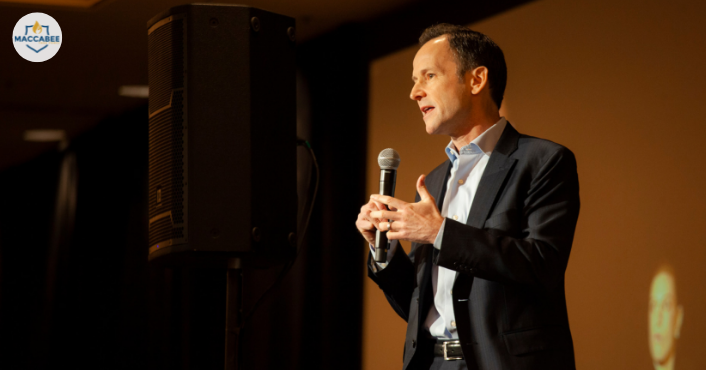 With anti-Israel agitation proliferating on college campuses, a robust organization devoted to fighting back with the truth was desperately needed. And in 2015, a new entity – the Maccabee Task Force – was formed to do just that. Philanthropists Sheldon and Dr. Miriam Adelson formed this advocacy group and tapped David Brog, then executive director of Christians United for Israel, to head it.

David Brog is a graduate of Princeton University and Harvard Law School; a former corporate attorney; former chief of staff for Senator Arlen Spector; and co-founder, along with Pastor John Hagee, of Christians United for Israel (CUFI) in 2006.

Brog helped grow CUFI into the largest and most influential pro-Israel organization in the U.S. with a current membership of over five million. And in just a few years as executive director of the Maccabee Task Force, Brog has expanded it from having a presence on six campuses to having a presence on 80.

The Jewish Press: How would you describe the goal of the Maccabee Task Force?

Brog: To combat delegitimization of Israel. When we go to campuses, we make the case for Israel to the students who dominate the political culture on campus. And these days, these leaders and influencers are typically on the left. So by default, we’re largely focused on making the case for Israel to progressives.

This work has implications well beyond campus. It’s actually the emergency of our time. An effort has been underway for many years to turn people on the left against Israel. And it’s clearly working. If this trend continues unchallenged, we will lose [the Democratic Party] on the issue of Israel, which would be a disaster.

Which anti-Israel groups are most prominent on campus?

SJP (Students for Justice in Palestine) and JVP (Jewish Voices for Peace). Typically, these two groups take the lead in pursuing BDS on campus – but their tactics shift. One year they might decide to bring a resolution for their university to divest from Israel and the next year they might launch a public campaign claiming that Israel is an apartheid state and never mention the word boycott.

What about other Jewish groups on campus – Stand With Us, AIPAC, etc. What do you do that they weren’t already doing?

You’re asking the question that I asked at the outset of our efforts. There are many groups out there doing great work – what can we add? So I spent a lot of time talking to people and visiting campuses, and after our first year we seized on the formula that we found was the most effective, which was to cut out the middlemen – to go right to the campuses themselves and speak to the stakeholders. And by “stakeholders,” I mean the pro-Israel students who go to that school and any professional whose focus is the campus – for example, the Hillel director, Campus Israel fellows, and the Chabad rabbi.

We ask them, “If money were no object, what would you like to do this year to combat BDS and delegitimization and proactively promote Israel?”

How do you implement these ideas?

We don’t have Maccabee chapters. Everything we do is through the existing pro-Israel groups. We offer our partners 25-30 strategies, not one of which was our idea. Every single strategy was brought to us by one of our partners on the ground. We offer them the best of these strategies and then offer to pay for it.

We’re making our partner campuses laboratories in which we can test the best new strategies. Because BDS is always changing and shifting and they’re always trying new tactics, narratives, and approaches, we have to constantly shift and change our response.

But big ideas without a budget are worthless. So we offer to pay to implement these strategies. The typical pro-Israel budget on most campuses was in the range of $5,000-$10,000 before we came around. Thanks to the generosity of Sheldon and Miriam Adelson, our average investment in a partner campus is now around $125,000.

So we bring our partner campuses strategies and funding, with the added benefit of saying, “By the way, you don’t have to put our name on it. It’s your work, you get the credit.” We did over 1,200 events on our campuses last year.

What are some of the pro-Israel strategies that you’ve been mentioning?

The most effective – and the most expensive – thing we do by far is offer each of our campuses a 10-day trip to Israel. Three to five pro-Israel students accompany 15-20 campus leaders and influencers who are typically not Jewish. We ask our partners to figure out who the 20 or so people who dominate campus politics are and to invite them on a trip to Israel.

As you know, there’s nothing like a trip to Israel to change hearts and minds. Luckily, anti-Israel students do us a favor. They paint such an inaccurate portrait of Israel – the anti-Israel narrative is so at odds with the reality – that when we show students the reality, it almost always changes their minds.

Where in Israel do you take them?

We let our partners design their own itineraries. Typically, they want to see the big cities, Tel Aviv, Jerusalem; sometimes they go up north. They want to meet Israelis who are doing some kind of co-existence work or who represent interesting communities in Israel.

We also bring our trips to the Palestinian Authority to meet Palestinians. They need to hear and see both sides. We have no interest in brainwashing them.

But the reality of Israel is so very much at odds with the anti-Israel narrative that we can send students to Israel to hear from a variety of perspectives with complete confidence that they’re going to come back much more supportive of Israel than they were before they left. We take students who are advocates of BDS, but when they see the reality, at a minimum they understand that [the conflict] is much more complex than they realized and change their views.

Is there a way of measuring how successful you’ve been?

You can measure it by how many BDS resolutions have passed on our campuses – and we go to the worst campuses, to every one that’s faced serious efforts to pass BDS. Last year, out of 40 campuses, a BDS resolution passed on only three. But more important than that is that no one we brought to Israel, with possibly a few exceptions, comes back and still supports BDS. That’s a significant metric.

Another significant metric is that close to half our participants actively fight BDS. This is really a significant change among the people who are dominating the political campus culture and who have been very hostile to Israel until they went on our trip.

What about Jewish students on campus? Are they easily swayed or intimidated by anti-Israel activism?

I’d say there are three groups of Jewish students on campus. The first group consists of those who are actively anti-Israel such as JVP and IfNotNow. I think what they’ve decided is their progressive values demand that they actively oppose Israel – which they do.

The third group – and the largest group, thank goodness – is the group that says, “Even though I don’t agree with everything Israel does, I’m pro-Israel, I’m against the delegitimization of Israel, I’m against BDS, and I’m going to actively support Israel and oppose BDS.”

The vast mainstream of the Jewish community on campus fits into this last group. That’s whom we work with. Again, a lot of them are left of center. A lot of them are critical of Israel. But we can work together where we agree, and leave those issues that might divide our community for another day.