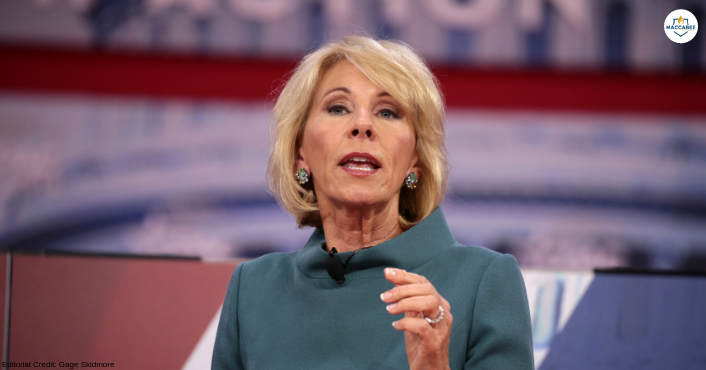 US education secretary says BDS movement claims it is concerned with human rights, but really ‘stands for anti-Semitism’

US Education Secretary Betsy DeVos said Monday that a movement to boycott Israel has become a “pernicious threat” on college campuses and is fueled by bias against Jews.

Speaking at a Justice Department summit on anti-Semitism, DeVos issued a scathing rebuke of the BDS movement, a campaign led by pro-Palestine activists calling for a boycott, divestment and sanctions of Israel over its treatment of Palestinians.

The movement has inspired activism at many US universities but is often a source of tension, especially among students and professors who support Israel. DeVos said Monday that Israel has friends in the Education Department and that the BDS campaign is “one of the most pernicious threats” of anti-Semitism on college campuses.

“These bullies claim they stand for human rights,” she said. “But we all know that BDS stands for anti-Semitism.”

DeVos, who is Christian, warned of an “alarming rise” in anti-Semitism but said US President Donald Trump’s administration is committed to stopping discrimination. She spent much of her speech defending Israel, and she drew applause when she referenced Trump’s 2017 decision to recognize Jerusalem as the capital of Israel, a move that drew condemnation from the United Nations.

“Peace in the Middle East begins with recognizing Israel’s right to exist,” DeVos said. “Israel is a light to the region, but we all know it’s surrounded by jihadists who embrace evil.”