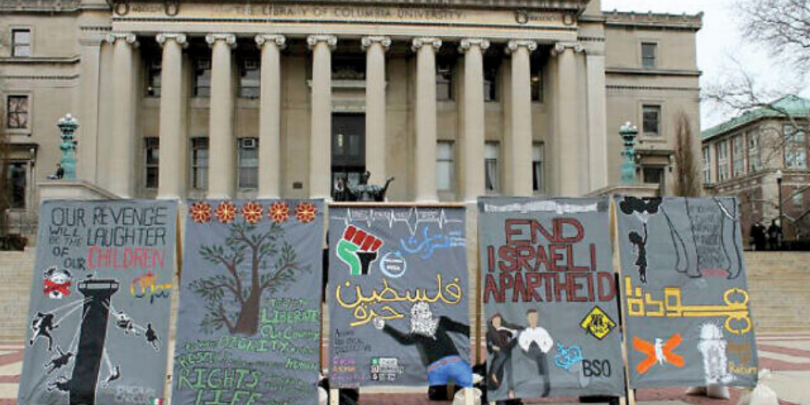 “Whether the referendum passes or not, Jewish students stand to suffer from the referendum even being held. ‘The strategy is if we win, great, if we lose, great,’ said Brog of the student groups behind the referendum, which includes Columbia Students for Justice in Palestine and Barnard/Columbia Jewish Voice for Peace… ‘In the process, a hostile environment is created for Jewish students'”
— David Brog, MTF Executive Director

As students at Columbia University prepare to vote on a referendum on divestment from Israel, the university’s president made a statement tying the Boycott Israel movement to the current rise in anti-Semitism.

Lee Bollinger’s statement before the university senate last week was hailed by pro-Israel activists on and off campus.

In remarks opposing the divestment proposal, Bollinger began, “I want to speak about a difficult matter — about a concern I have regarding the risk of a rising anti-Semitism on our campus. Any bigotry and prejudice toward groups is intolerable … we should be quick to condemn its presence in any form and in any context.”

Although he did not directly say that the boycott, divestment and sanctions movement against Israel is anti-Semitic, he said BDS is “being debated” in a “process of mentality that goes from hard-fought debates about very real and vital issues to hostility and even hatred toward all members of groups of people simply by virtue of a religious, racial, national or ethnic relationship. This must not happen.”

The referendum, which has not yet been scheduled but is expected in early April, asks the university to divest from eight companies activists say profit from Israel’s occupation of the West Bank.

It comes after several years of increasing activity by pro-Palestinian groups on campus seeking divestment of the university’s endowment from companies with connections to the Israeli military or to settlement building. This year’s referendum, which was authorized by the Columbia College Student Council (CCSC) in November, comes after two previous failed attempts in the last three years.

Brian Cohen, the head of the Columbia/Barnard Hillel, called Bollinger’s statement “one of the strongest statements I have seen from a University president.”

“The University leadership has made it clear that they will not divest but the BDS student activists will not stop until a referendum passes,” added Cohen, the Lavine Family Executive Director of the Kraft Center for Jewish Student Life.

Columbia/Barnard Jewish Voice for Peace, Columbia Students for Justice in Palestine and Columbia University Apartheid Divest did not respond to requests for comment over email or Facebook.

Bollinger gave two reasons for opposing divestment: the lack of a broad campus consensus on the issue, as well as a double standard being applied to Israel.

“I believe this imposes a standard on this particular political issue that is not right when one considers similar issues in other countries and in other contexts around the world,” said Bollinger.

Bollinger also placed the referendum in the context of rising anti-Semitism, mentioning an incident in February in which swastikas were found on the walls of a Columbia dormitory. But he also referred to accusations that the university itself had ignored or encouraged anti-Semitism in recent years.

“With respect to anti-Semitism, there are now assertions by outsiders that Columbia is an ‘anti-Semitic’ institution with systemic bigotry,” said Bollinger. “This is, of course, preposterous. No Jewish student, faculty member, or staff I know believes this to be the case; nor do I. But the absurdity of the claim does not and should not stop me or us from speaking out against instances and episodes of anti-Semitism that do exist.”

Bollinger faced complaints over the years when the university invited speakers known to profess anti-Semitic views, like Malaysian Prime Minister Mahathir Mohamad and Iranian President Mahmoud Ahmadinejad, and of professors espousing criticism of Israel that critics say has veered into anti-Semitism.

In December, The Lawfare Project filed a complaint on behalf of a student at Columbia with the U.S. Department of Education’s Office of Civil Rights; a 2019 executive order by President Trump extended civil rights protections to Jewish students on college campuses receiving federal funding. The complaint claims that the university has not done enough to address “a severely pervasive and hostile environment” where “students (and faculty) are harassed, singled out and discriminated against under the guise of ‘pro-Palestinian’ advocacy.”

Cohen, the Kraft Center’s executive director, also noted an “increase in the number of anti-Semitic incidents on campus,” but was hesitant to tie them all to the referendum. “Some are certainly connected to the BDS referendum while others are likely examples of what we are seeing in New York City and around the country,” he said.

A measure similar to the one passed by CCSC in November was passed last year by the student council at Barnard College, also part of Columbia University. That referendum — also calling for divestment from eight companies said to be involved with Israel’s occupation of the West Bank — passed with 64.3 percent of voters in favor. Barnard President Sian Leah Beilock announced soon after that vote that Barnard would not take action to divest from those companies.

“There’s a feeling of real exhaustion around this issue,” said Yaira Kobrin, a junior at Columbia College and president of Columbia/Barnard Hillel’s student board. “Lots of Jewish students feel stressed about having to deal with this issue again, and exhausted by having to continually deal with the BDS referendum and vote each year.”

But she also praised the administration for addressing Jewish students’ safety.

“Many Jewish students on campus do feel less safe, in a way that is reflective of Jewish sentiment across the country,” said Kobrin. “The university, though, is taking active steps to make Jewish students feel safer on campus, by meeting with students to understand their lived experience and making strong statements against increased anti-Semitism on campus. There’s more work for them to do, but I think they’re starting with the right steps.”

Outside groups are tracking the referendum vote closely.

David Brog, executive director of the Maccabee Task Force, an anti-BDS watchdog group funded by the Jewish philanthropist Sheldon Adelson, said that whether the referendum passes or not, Jewish students stand to suffer from the referendum even being held. “The strategy is if we win, great, if we lose, great,” said Brog of the student groups behind the referendum, which includes Columbia Students for Justice in Palestine and Barnard/Columbia Jewish Voice for Peace. Brog said that the publicity around the referendum is more important than the result. “In the process, a hostile environment is created for Jewish students,” he said.

Richard Priem, associate director of the Anti-Defamation League’s New York/New Jersey region, noted that the ADL has tracked an increase in white supremacist activity on campuses as well as an increase in campus incidents related to BDS. He called the BDS referendum “detrimental for the campus environment” but said that “it doesn’t mean that every Jewish student will be impacted.” Still, he said, “it’s probably not helpful when anti-Semitism is at near record levels, including on college campuses.”