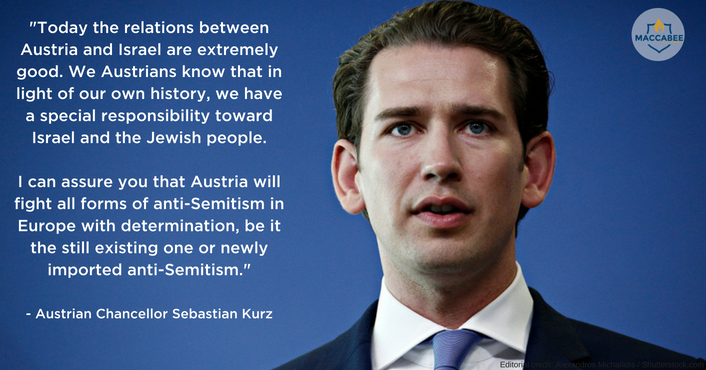 Austrian Chancellor Sebastian Kurz vowed to fight “all forms of anti-Semitism” with determination as he met Prime Minister Benjamin Netanyahu in Jerusalem on Monday, promising to combat both traditional European anti-Semitism and the modern anti-Semitism being imported to Europe from the Middle East.

Kurz is on a two-day visit to Israel, his first since entering a coalition deal with the far-right Freedom Party that was founded by former Nazis but says it has left its Nazi past behind.

Israel has previously said it would not have direct contact with Freedom Party officials, accusing the party of Nazi links. Israeli media reported on Sunday that Kurz would be asking Netanyahu to end this boycott.

At a joint press conference with Kurz, Netanyahu called the Austrian leader “a true friend of Israel and the Jewish people.”

“I think you demonstrated that today when you went to the Kotel, the Western Wall,” Netanyahu said. “I hope that other European leaders will follow your important example.”

Kurz thanked Netanyahu for his kind words and for the personal relationship he said they have had ever since Kurz served as Austria’s foreign minister.

“Today the relations between Austria and Israel are extremely good. We Austrians know that in light of our own history, we have a special responsibility toward Israel and the Jewish people,” Kurz said. “I can assure you that Austria will fight all forms of anti-Semitism in Europe with determination, be it the still existing one or newly imported anti-Semitism.”

In an interview with Israel Hayom on Monday, Kurz discussed a wide range of issues, from reports he had asked Netanyahu to end Israel’s official boycott of Freedom Party officials in Austria’s government to possible changes to the EU policy toward Israel when Austria assumes the rotating EU presidency next month.