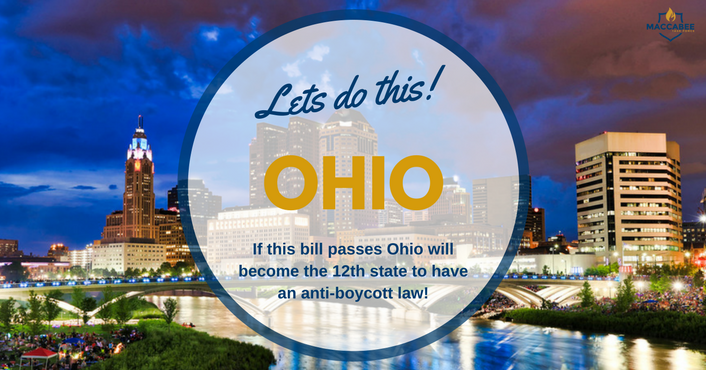 Successful passage would make it 12th state to have anti-boycott law.

“Ohio has always been a state of inclusion that stands against all forms of bigotry and racism… It is high time that we stand with our students who are being terrorized on a daily basis by thugs and hoodlums in the name of BDS.”

An anti-BDS resolution spearheaded by a Christian-Zionist organization is set to pass in the Ohio Senate, which will make it the 12th state in the union to do so.

“This resolution will provide another hurdle for the antisemitic BDS movement in states across the US,” Laurie Cardoza-Moore, president and founder of Proclaiming Justice to the Nations. “Ohio is the 12th state to introduce a version of the resolution passed in Tennessee in 2016. Proclaiming Justice to the Nations will continue to do everything in our power to defend the rights of our children and grandchildren to study in a safe learning environment without threats or intimidation from antisemitic groups with known ties to terrorism that masquerade on campus as human rights advocates.”

The Ohio Senate will be presented with resolution HCR 10, which condemns the antisemitic Boycott, Divestment and Sanctions movement. The resolution was introduced in the Ohio House by Representatives Andy Thompson and Dave Greenspan. “This is the 12th resolution of its kind to be presented to a US State legislature as a result of the efforts of Proclaiming Justice to the Nations,” said PJTN’s Ohio state director, Mike Goldstein.

This bipartisan resolution passed the entire House on December 5, 2017 by a vote of 92-2. HCR 10 was sent to the Senate where it was assigned to the Senate Transportation, Commerce and Workforce Committee, chaired by Senator Frank LaRose.

The resolution focuses on the plight of students that are being harassed, intimidated and attacked in the name of BDS.