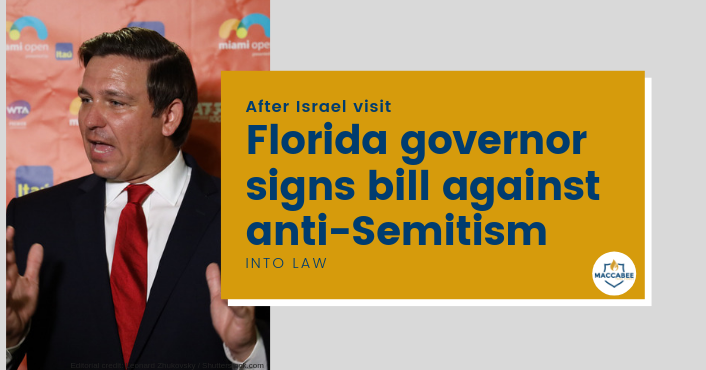 DeSantis had held the ceremonial signing during a Florida Cabinet meeting at the US Embassy on Wednesday. He officially signed the bill on Friday in Tallahassee.

Using the State Department definition as its template, the legislation  defines as anti-Semitism calls for violence against Jews, advancing conspiracy theories about Jewish control and Holocaust denial. It also includes “applying double standards” to Israel “by requiring of it a behavior not expected or demanded of any other democratic nation.”

The measure also mandates that discrimination against Jewish people be treated the same as acts of racial discrimination in Florida’s public education institutions.

“I’m proud to sign this bill to make clear through a bipartisan effort that anti-Semitism has no place in our state and our educational institutions will not tolerate discrimination against the Jewish people,” DeSantis said at Friday’s signing.

He called Florida “the most Israel-friendly state in the country.”