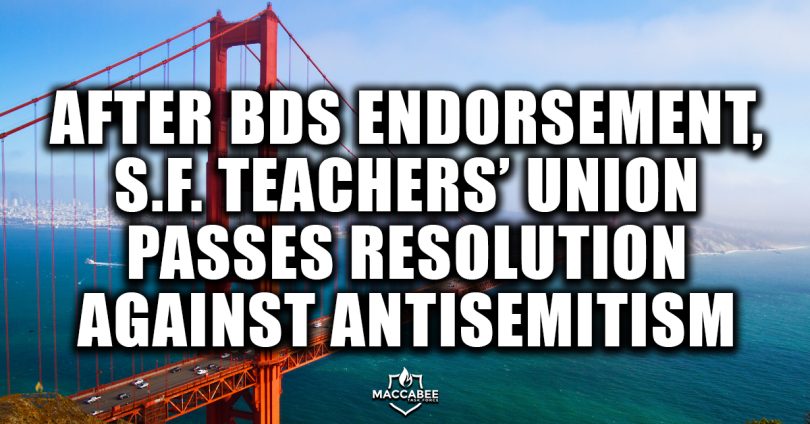 After its historic endorsement of the BDS movement against Israel on May 19 and the angry response that followed from some in the Jewish community, the executive committee of the San Francisco teachers’ union passed a new resolution on June 2 condemning antisemitism and voicing support for the rights of Israelis and Palestinians to live in peace.

It came hard on the heels of the first resolution, “in Solidarity with the Palestinian People,” that supported the boycott, divestment and sanctions movement and referred to Israel’s “regime of legalized racial discrimination.”

The 40-member executive committee is the highest decision-making body of the United Educators of San Francisco.

The resolution was passed unanimously, according to Andrew Crook, a spokesperson for the American Federation of Teachers who was speaking on behalf of the UESF. He said it does not replace the previous resolution, but that the two will now live side by side. The June 2 document is signed by UESF president Susan Solomon and three other union members, including its political director Anabel Ibanez.

The May 19 resolution was introduced by 10 teachers in the school district and voted on by the union’s delegate assembly, made up of representatives from different  schools.

Solomon did not respond to an email or phone call inquiry from J.

In 1,185 words, the new resolution offers a wholesale condemnation of “bigotry, discrimination, oppression, and racism” against minority groups, including Jews and Muslims, and makes mention of the recent U.S. wave of antisemitic attacks against Jews.

While UESF’s original resolution singled out Israel for its role in the recent conflict, the new document includes a denunciation of Hamas’ actions.

It reads: “Whereas, United Educators of San Francisco deplores the fact that Israeli airstrikes killed hundreds of civilians including children; and we deplore, as well, that Hamas rockets killed Israeli civilians and children.”

The resolution also calls the May 20 cease-fire “critical” to ending the violence, “[but] it cannot lead to a lasting and permanent peace if the underlying causes of the violence remain unresolved,” and it argues for an end to “the [Israeli] occupation and the blockade.”