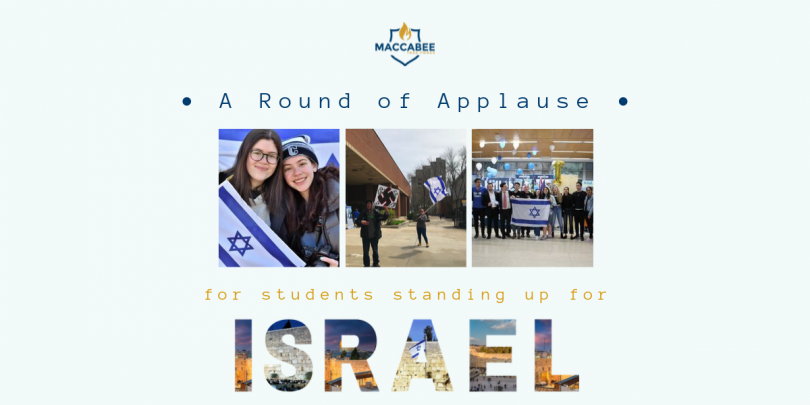 College is a remarkable, challenging incubator for growth, development, and learning. Many students are living on their own, supporting themselves financially, and have the freedom to shape their academic path and success for the first time in their lives.

But for some students, these aren’t the only new challenges they face. They are forced to deal with unthinkable challenges—mock eviction notices or swastikas posted on their dorm room doors, professors refusing to write recommendation letters for study abroad despite their great merit, their photos being shared on white nationalist websites riddled with racist rhetoric directed towards them. These are just a few of the added issues these students face.

A recent report released by AMCHA Initiative details how “anti-Israel anti-Semitism,” specifically, is exceeding “classic” anti-Semitism. Incidents on campus are increasing at an alarming rate, up 70% since 2017. The delegitimization of Israel is often the mask anti-Semitism hides behind on college campuses, with the BDS (Boycott, Divestment, Sanctions) Movement at the forefront of the pack. And, no surprise here—“92% of expression of support for academic BDS included Israel-related anti-Semitic expression.”

These troubling trends are beginning even earlier for some students. Anti-Semitic incidents committed by teens have been cropping up across the country. In California and Wisconsin, high school students posted photos giving Nazi salutes. As recently as September 14th, a teenager was arrested for swerving towards two Jewish people on the street, while yelling a string of anti-Semitic obscenities out of the window. It is undeniably apparent that young Jews and supporters of Israel are at a heightened risk of discrimination.

Therefore, we must commend these students pushing back. Rather than cowering in silence, they are taking action. At NYU, in the face of physical violence, pro-Israel students stood up for their right for representation in student government, and against the sham of anti-Israel legislation on their campus. At UW-Milwaukee rather than ignore or avoid a Holocaust denier on her campus, our upcoming Maccabee of the Month, Sarah, stood her ground and didn’t allow this racist, obscene rhetoric to go unchallenged.

Last week, the openly anti-Semitic Prime Minister of Malaysia, Mahathir bin Mohamad spoke at Columbia University. Some of his direct quotes during that event include—“If you can’t be anti-Semitic, there’s no free speech.” “Why can’t I say something about the Jews, when people say nasty things about me and about Malaysia?” While the University allowed this to happen on their watch, one student took matters into her own hands.

Rather than let his dialogue go undisputed, this young woman shined a spotlight on his true character to the audience. She quoted to he and the audience some of his previous anti-Semitic statements, including Holocaust denial and how he was “proud to be labeled anti-Semitic.” She also stated that for him to speak at a place like Columbia indicated he was “either brazenly provocative or astonishingly ignorant.” Her display of courage, poise, and chutzpah was tremendous.

In these environments where students are at a heightened risk of being on the receiving end of bigotry for expressing their thoughts and values to their fellow students (particularly when it comes to their support for Israel), it is incumbent upon us to be a constant source of encouragement and support. These students need to know that we have their backs, and when push comes to shove, they are not alone in this struggle. This is an issue that is critically important to our entire community, and frankly to everyone. To all of the students standing up for Israel on your campuses—we applaud you, we are proud of you, and we are here for you.